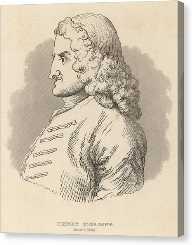 Henry Fielding was born on April 22, 1707, in Sharpham, Somerset, England. His parents were Mr. and Mrs. Edmund Fielding. He also had a sister, Sarah Fielding, who also became a writer.  Before becoming a teenager, Fielding’s mother died. His father later remarried. Feilding was then raised by his father and step-mother for the rest of his time at home.

Henry Fielding attended Eton College. While there, he studied literature and writing. It was while in school that he began writing plays. He later switched schools to study at the University of Leiden. There, he continued to study literature and writing, but he also began studying law. Unfortunately, he was running low on money, and had to return home before finishing his studies.

Fielding's writing career began when he published his first work, a poem: The Masquerade. However, his name became known not for poetry, but for his plays. He published his first play, Love in Several Masques, in 1728. He then went on to write several more plays throughout the 1720’s and 1730’s. Some of his plays included The Modern Husband, The Grub Street Opera, and The Temple Beau. Many of his plays poked fun at English political figures. It is thought that this was part of the reason why the Theatrical Licensing Act of 1737, an act making it illegal to write plays which made fun of government members, passed. After the law was passed, Fielding retired from writing plays.

In 1739, Henry Fielding started his own newspaper, British Mercury. Here, he continued to write, even though he no longer wrote plays. He wrote satire often, sometimes poking fun at the government. It was still illegal to perform plays mocking government officials, but it was not illegal to write stories mocking government officials, and Feilding used this loophole to his advantage. Sadly, the newspaper did not run for long.

In the 1740’s Henry Fielding took to writing novels. His first published novel came out in 1741 and was titled Shamela. He wrote several more books throughout the decade, including the following: The History of the Adventures of Joseph Andrews and his Friend, Mr. Abraham Abrams, The Life and Death of Jonathan Wild, and The History of Tom Jones, a Foundling.

In 1752, he started another periodical, The Covent-Garden Journal. Fielding both funded and edited the paper. This journal commented on the government often, as well as social issues. It was not well-liked among other authors. It ran for 72 issues, stopping production in the same year it began.

Some of his other famous works are listed below.

An Apology for the Life of Mrs. Shamela Andrew

Although Feilding commonly poked fun at the government in his writings, he held the law in high regard. He was a law-abiding citizen for the most part. He also wrote some essays and articles on the subject, but these did not become famous.

In the 1740’s, Fielding’s reputation was on the rise, and he was elected to be a justice of the peace. Later in the same decade, he became a magistrate. In both positions, he was said to have done a great job. In 1749, he and his half-brother John Fielding create the Bow Street Runners. They were a police force that kept the law in London.

Henry Fielding first married Charlotte Craddock. Together, they had five children, all of which but one, died before reaching adulthood. The marriage ended with his wife’s death in 1744. His only adult child died shortly after. He was married for the second time to Mary Daniel, who before the marriage had become pregnant with his child. He also had five children with this wife, only two of which lived long enough to reach adulthood. This marriage ended with Fielding’s death.

Henry Fielding began suffering from gout in the 1740’s, and by the 1750’s, his condition was becoming intolerable. He was confined to a wheelchair in 1752. In 1754, he moved to Portugal to find a cure but only ended up dying a few months later. Henry Fielding died on October 8, 1754, in Lisbon, Portugal. He was 47 years old when he passed away.