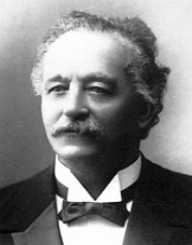 French economist and peace activist Frederic Passy was born on the 20 May 1822, Paris, France. He came from a well-connected family with an uncle who had been a cabinet minister under Louis Napoleon. His father was a Waterloo veteran.

Frederic Passy initially trained as a lawyer and worked in the civil service as an accountant for three years. He then returned to studying and became a theoretical economist in 1957. During 1860-1861 Passy cemented his academic reputation when Passy delivered a series of lectures at the University of Montpellier. An adherent of Richard Cobden, he was in favor of free trade which he believed would unite nations.

Frederic Passy was influenced by the Crimean War (1853-1856). He observed the lasting impact that war has on people, noting that people recovered quicker from the trauma of natural disasters as opposed to war.

In 1867 when Germany and France were at loggerheads over Luxembourg, Passy wrote an article pleading for peace calling for an international peace movement to avoid war. After a positive response to his article, he founded the International League for Peace. At the end of the Franco-Prussian War (1870-1871), Passy advocated permanent neutrality and independence for the Alsace-Lorraine region. In 1878, he founded the French Peace Society.

As a Republican, Passy would not be part of Napoleon III’s government but was later, in 1881 and 1885, he was elected to the French Chamber of Deputies. Passy was in favor of arbitration between the Netherlands and Frances of a territorial dispute in French-Guiana-Surinam, opposed the government’s colonial policy and was in favor of labor reform. Passy was also involved in the formation of the Inter-Parliamentary Union in 1888 and 1901 was one of the first recipients of the Nobel Prize for Peace.

Frederic Passy lectured widely on economic subjects in most cities and universities in France and continued publishing on financial matters. He was subsequently elected to the Academy of Moral and Political Sciences, one of the five academies of the Institut de France in 1877.

In 1901 Frederic Passy, along with Jean-Henri Dunant, was awarded the first Novel Prize for Peace.

Frederic Passy died on June 12, 1912, at the age of ninety. His son Paul Passy was the founder of the International Phonetic Association.