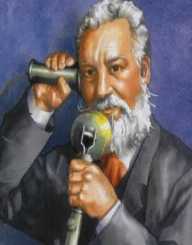 Alexander Graham Bell was born on March 3rd, in 1847. His place of birth was in Edinburgh, Scotland. He gained the recognition of being one of the greatest inventors of all time for his invention of the telephone. He took the patent of the first ever practical phone while working with Thomas Watson. During his lifetime, he had 18 patents under his name with 12 others that he shared with his partners. Bell passed away at the age of 75 on August 2nd, in 1922.

At the time of his birth, his family lived at 16 South Charlotte Street. As a result of the fame that Alexander Graham Bell gained throughout his lifetime, Bell’s family place was inscribed with a mark indicating that it was Bell’s place of birth. His parents, Alexander Melville and Eliza Grace Symonds Bell had three kids with Bell being their second born child. Bell’s other brothers were Melville James and Edward Charles. In the beginning, Bell’s given name was Alexander Bell. This however changed when he was ten years old. He requested his father to give him the middle name that his brothers also had.

Right from the time, Bell was young; Alexander Graham Bell received his early education from his mother, Grace. She was a skillful pianist and a painter in spite of the fact that she was partly deaf. He later went for his high school education at Edinburgh’s Royal High School.

When Alexander Graham Bell was only 12 years old, he had begun experimenting with things that he came across with on his daily schedule. Around this time, he managed to come up with a primary machine that would help in the easy removal of husks from wheat grains. This was an invention that he came up with after seeing the tedious process his friend had to go through while operating their flour mill.

Working with the Deaf

Alexander Bell’s father had already set his mind on the career path that his son would follow. Nonetheless, Bell was resistant to this as he yearned for something else. In a bid to escape from his father’s pressures, he opted to care for his ill grandfather in 1862. With time, his elder brother encouraged him on the importance of learning. This inspired him, and he was back working with his father in London again. He took over from his father in managing the business operations which occurred in London.

It is while working with the deaf that Alexander Graham Bell had a dream of changing the future of communication. After shifting to Boston in 1871, he spent a lot of time in working on his new project. He was building a device that would permit transmission of messages on varying frequencies. His progress was boosted by the fact that he gained financial help from Gardiner Hubbard and Thomas Sanders who were local investors. In the process of trying to make the telegraph better, something else came up.

Alexander Graham Bell began envisioning what would happen if the human voice could be transmitted through wires. His donors were aggravated at his decision, and they had to hire someone else to continue with the telegraph project. They brought Thomas Watson into the picture. He was an experienced electrician. Nonetheless, Watson did not work on the telegraph, but he also developed an interest in the idea that Bell had in mind. This is how the two became partners as Watson’s electrical skills became handy to Bell.

The duo spent close to a year in working on their two pending projects. One was the harmonic telegraph, and the other was their upcoming telephone device. Sooner or later, patents began to emerge now that investors started to trust their ideas. On March 10th, 1876, the development of the telephone device was successful. This was followed by public demonstrations on how the device functioned. With success coming Bell’s way, The Bell Telephone Company was established the following year.

There were numerous challenges that Bell’s company faced. More than 500 cases came up during the next two decades. Some of these cases were heard at the Supreme Court, but not a single one prevented Bell and his new company from thriving. A good number of people in the U.S. appreciated the invention, and by 1886, over 100,000 owned these telephones.

On July 11th, 1877, Alexander Graham Bell wedded Mabel Hubbard. The couple had four children together. Sadly, two of their sons did not make it past infancy.

After Alexander Graham Bell's world-changing invention, he died on August 2nd, 1922 after struggling with diabetes for some time. At the time of laying him down to rest, all telephones were shut down for one minute in honor of his legacy.