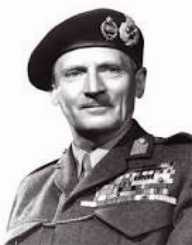 One of the veteran soldiers who had the opportunity to serve theircountry in the two major wars World War I and IIwereField Marshal Bernard Montgomery, 1st Viscount Montgomery of Alamein a Senior British Army officer. Born on November 17, 1887, and also known as Monty or Spartan General he started the World War I as a junior officer of the Royal Warwickshire Regiment at Meteren rose to a general staff officer of the Western Front in April 1917 and finished as chief of staff of the 47th (2nd London) Division.

In the World War II, Bernard Montgomery served as the commander of the British Eight Army in the Western Desert from August 1942 to May 1943 and held several other commanding positions. He had previously fought in the inter-war years as the commander of the 17th Battalion, Royal Fusiliers, 1st Battalion, Royal Warwickshire Regiment, the commander of the 9th Infantry Brigade and later the General Officer Commanding 8th Infantry Division. Bernard Montgomery, served in positions like Commander-in-chief of the British Army of the Rhine in Germany, Chief of the Imperial General Staff from 1946 to 1948 and later as the Supreme Commander of NATO in Europe after the World Wars.

Bernard Montgomery was born to Henry Montgomery and Maud in Kennington, London, England as the fourth child of nine. Henry was a minister at the Ulster Scot Church of Ireland who would later move to Tasmania where he was a Bishop. Maud never took interest in the education of her children and continued to maltreat them when Henry was away. With this kind of upbringing, Bernard Montgomery, became a bully while growing up. In 1897 while Bernard was age ten, the family moved back to England for a Lambeth Conference where Bernard Montgomery and his brother Harold had a term education at The King’s School, Canterbury.

Bernard Montgomery,’ first war was the World War I in August 1914 where he led his Battalion to France. He was in action at the Battle of Le Cateau and the retreat from Mons. On October 1914, Bernard Montgomery was shot through his right lungs and the knee by a sniper at Meterenat Bailleul during a counter-offensive of an Allied. Bernard Montgomery, was later that year awarded the Distinguished Service Order for gallant leadership.

Bernard Montgomery was appointed the brigade major of 112th Brigade and later 104th Brigade upon his recovery. He was involved in the Battle of Arras in April to May 1917 after he had returned to the Western Front in 1916, as a general staff officer in the 33rd Division. He served in several other capacities and ranks until the end of the war. Montgomery also fought in the Irish War of Independence in 1921 and later in the Second World War in September 1939 when Britain declared war on Germany. He served in various positions and gained several ranks to later become Lord Commander. Throughout his service, he was seen as highly notorious, had no sense of diplomacy and highly egoistic. He was also a fierce critic some of his wartime comrades

Bernard Montgomery, became the Commander of the British Army of the Rhine after the war and in 1946 was created 1st Viscount Montgomery of Alamein. From 1946 to 1948,Bernard Montgomery, replaced Alanbrooke as theChief of the Imperial General Staff. Bernard Montgomery, also held positions like the Chairman of the Western European Union’s commander-in-chief and later retired from service in 1958 age 71. From 1951 to 1966, he served as the chairman of the governing body of St John’s School in Leatherhead, Surrey. He also became an honorary member of the charity club Winkle Club.

Bernard Montgomery refused to attend his mother’s funeral after her death 1949 with claims of being too busy.

Bernard Montgomery dated Miss Betty Anderson in 1925, but she refused getting married to him. Two years later he married Elizabeth Carver, the widow of Oswald Carver. The couple was blessed with a son, David in 1928 but better also had two sons from her former marriage. Elizabeth died in 1937 from septicemia after being bitten by an insect during a holiday in Burnham-on-Sea which became infected. Her leg was amputated after the infection had spread. Bernard Montgomery also died in 1987 at his Islington home age 88. The cause of his death was not known and was buried at the Holy Cross churchyard, Binsted.