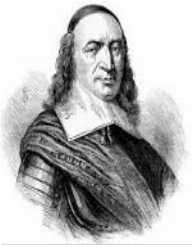 Peter Stuyvesant was the last Dutch Director-General of the settlement of New Netherland. The British took control of the settlement in 1664 and later renamed it as the New York City. There is a conflicting report of the year of birth of Peter. According to some historians, Peter was born in the year 1592. He was born in Peperga, Friesland, Netherland. However, no specific date of birth is available in the public domain. He grew up under the watchful eyes of his father Balthasar Stuyvesant, a Calvinist minister and his mother Margaretha Hardenstein.

Peter attended the University of Franeker. He studied Philosophy and languages there. However, during his later years, he was accused of enticing the daughter of the owner of his rented accommodation. As a result, the University expelled Peter.

Upon his dismissal from the University of Franeker, he arrived at the city of Amsterdam. At Amsterdam, he joined the Dutch West India Company. In 1630, his company sent him to Fernando de Noronha which was a small island off the coast of Brazil. He was to act as the commercial agent of his company there. At the island, he completed five successful years of his initial assignment. During this period, he showcased exceptional administrative capabilities. As a result, the company transferred him to the neighboring Brazilian state of Pernambuco.

In 1638, he became the Governor of the colony of Curacao. At that time, Pernambuco was the main Dutch naval base in the entire West Indies. Later, in April 1644, he led a coordinated attack on the island of Saint Martin. The intention was to recapture the island from the hands of the Spanish. He severely injured his right leg during the assault. The leg was crushed by a cannonball. Later, the doctors amputated the injured leg from below the knee. Thereafter, Peter came back to the Netherlands.

Peter used a wooden prosthesis in place of his amputated right leg after recovering from the fatal injury. In May 1645, the Dutch West India Company selected him as the Director-General of the settlement of New Netherland. His jurisdiction included the New Amsterdam, the present day New York City of the United States. Willem Kieft, his predecessor, had left the colony in shambles. Therefore, Peter’s first and foremost duty was to rebuild the colony. His administrative efficiency soon turned the colony into a prosperous territory. In July 1646, he also became the Director-General of all areas of North America and West Indies under Dutch control.

Peter's tenure was not without controversy. He disallowed any religious freedom to the inhabitants of the Dutch occupied territory. His refusal to grant the required liberty to preach any religious faith other than that of the Dutch Reformed Church showed him in poor light. The rigidity he had shown in pursuing religious freedom later paved the way for the Bill of Rights. The United States Constitution propagated the bill. They also ensured freedom of religion for all.

On September 6, 1664, Peter surrendered the territory of New Netherland to a resurgent British force. An Articles of Capitulation was signed between his representatives and his British counterparts to validate the surrender. Thereafter, all the occupants of the settlement were assured of their life, estate, and liberty.

Peter married Judith Bayard in 1645. His sister Anna Stuyvesant was the wife of Judith’s brother Samuel Bayard. Peter and Judith together had two sons. He left for his heavenly abode in August 1672. His mortal remains was interred in the east wall of St. Mark's Church in-the-Bowery.

As an early architect of the present day New York City, his name appears on a lot of landmarks all over the city.