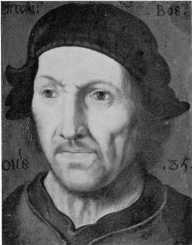 Hieronymus Bosch was a Dutch painter and draughtsman during the Early Netherlandish Renaissance.

Jeroen van Aken was born in ‘s-Hertogenbosch, a city in the Duchy of Brabant, located in modern-day Netherlands. The estimated year of his birth is 1450. He received his artistic training from his family members. His grandfather, Jan, was a painter. His father, Anthonius, was also a painter and an artistic adviser. His uncles and his brothers were also involved with art. He took the pseudonym Hieronymus Bosch upon the beginning of his career.

Bosch began his career by opening up his own workshop. He created complex works with religious motives. Some of his earlier paintings include Crucifixion, The Seven Deadly Works, The Cure of Folly, The Marriage at Cana, and others. In 1488, he joined the Brotherhood of Our Lady, a confraternity devoted to the Virgin Mary. His membership in the organization led to several commissions. Between 1495 and 1505, he painted his most famous work, a triptych called The Garden of Earthly Delights. It consists of three scenes which depict the Garden of Eden, a landscape with people indulging in sin, and the Last Judgment. Some of his later paintings include Saint Jerome in Prayer, Christ Carrying the Cross, and The Crowning with Thorns.

In total, about 50 paintings came out of Bosch’s workshop. He signed several of them, which was unusual for the other artists in that era. 25 of those paintings can be attributed to him. The others were created by the pupils that he taught in the workshop. Apart from his paintings, he also worked on drawings, stained glass, altarpieces, and decorative works.

Bosch married a woman named Aleyt Goyaerts van den Meerven sometime between 1479 and 1481. She came from a wealthy and prominent family. Her connections helped him further his career.

The exact date of Bosch’s death is not known. His funeral mass was held on August 9, 1516, in the Church of Saint John.

Bosch’s style was quite influential, so many artists that came after him tried to imitate his work. By the end of the 16th century, King Philip II of Spain acquired many of his paintings. Some of them are still displayed at the Museo del Prado in Madrid. The rest of his work is located in museums and galleries across Europe and the U. S. They include the Metropolitan Museum of Art in New York City, the Louvre in Paris, the National Gallery of Art in Washington D. C. and many others.