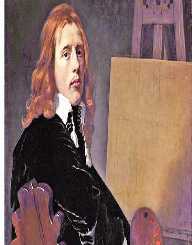 Paulus Potter was born on November 20, 1625, in Enkhuizen, The Netherlands. The actual date of his birth is disputed, but there are records showing that he was baptized on November 20, 1625, so that is the date that historians use for his birth, even though it is likely that his actual birthday was a few days before that. His parents were Aaltje Paulusdr Bartsius and Pieter Symonsz Potter.

He also had two siblings, Maria and Pieter II. Sadly, Aaltje died while Paulus was young. Soon after, Pieter Codde and his wife, along with other artists of the time, lived with the Potter family, as they often opened their home to artists and craftsmen. Because of this, Paulus was raised by much more people than just his parents.

As a child and teenager, Paulus Potter studied art under his father (who was also an artist). It has also been suggested that he studied under the artist Jacob de Wet, who was a family friend of the Potter family.

Paulus Potter began his career as a painter sometime around 1640’s. He operated out of Amsterdam for a few years before moving to Southern Holland around the mid-1640’s. While here, he joined a painter’s guild called the Guild of St. Luke. It was also while here that he made some of his best paintings. The late 1640’s are thought to be some of his most productive and impressive times as an artist. Some of his famous paintings from this period include The Young Bull, Figures with Horses by a Stable, and Two Pigs in a Sty.

In 1649, Paulus Potter moved to Hague. Here, he lived with Jan Van Goyen, another famous artist of the time, and likely learned some more painting techniques from here. He did not live here for long, as he was married soon after arriving in Hague.

Around 1650, Paulus Potter took on a job as a court painter. Some of the people he painted for were Amalia of Solms-Braunfels and the Regent of Orange-Nassau. However, some of his paintings were not as classy as the people of the court expected them to be. The painting that eventually got him fired as a court painter showed a cow urinating. He was later sued by the same country around 1651.

Around 1652, Paulus Potter moved back to Amsterdam. The people here loved him. He was hired for several commissions, including a painting of Diederik Tulp. However, this painting reduced his credibility, as it is rumored that he painted over the face of another one of his paintings and tried to pass it off as a new painting. He was not paid for this piece of art.

Throughout his entire career, most of Potter’s paintings pictured animals or other parts of rural life. Overall, he painted over 100 paintings. Some of his famous paintings are listed below.

Paulus Potter married Adriana van Balkeneynde in 1650. The couple had no children. The marriage ended with Potter’s death.

Paulus Potter began suffering from tuberculosis in the early 1650’s. Soon after, he died on January 17, 1654, in Amsterdam, The Netherlands. He was only 28 years old when he passed away.