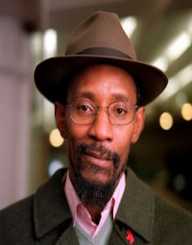 Linton Kwesi Johnson was born in Chapelton, Clarendon Parish, in Jamaica on August 24, 1952. He went to live with his mother in London, England in 1963 aged 9 years. He joined Tulse Hill School. He became a member of the British Black Panther Movement while in high school. The movement advocated for the rights of the African population in Britain. Johnson used his Jamaican heritage of music and traditional Caribbean poetry to galvanize the youth within the movement. He introduced the aspect of Black Nationalism within the British movement. When the idea failed, Johnson explored the ideology of the Rastafarian Movement.

He got admitted at the Goldsmiths College in London after his graduation from high school. He studied and graduated from the college with a degree in Sociology in 1973. In 1977 he became a resident writer in the Lambeth. He got employed at the Keskidee Center as the Library Resources and Education Officer. The center was the first public theater of black art, history, and heritage. Johnson regularly presented his poems at the theater accompanied by the reggae formation Rasta Love.

In 1974 he made his first poetry publication in the local journal Race Today. He published the collection titled Voices of the Living and the Dead. The following year, Johnson did his second collection Dread Beat An’ Blood. The poetry collection became the base of the film adaptation by the same name later in the year. Johnson also released his debut single with the title Dread Beat An’ Blood in 1978. He did his first album in 1978 titled Forces of Victory.

In 1980, Johnson published the controversial book titled Ingland Is A Bitch. The book serialized the historical injustices subjected to the Africans by English society over the years. He followed up the book with a reggae album Bass Culture in 1980. He produced his last albums with Island label in 1981 titled LKJ in Dub and Making History. He founded his own recording studio in 1981 called LKJ. He based his recordings mostly with musical poets of the Caribbean and African origin.

Johnson turned to journalism. After working briefly with Race today journal, he moved to the BBC. He hosted the musical radio program From Mento to Lover Rock. The 10 part series premiered on Radio 1 in 1982. The radio channel replayed the series in 1983. He became a regular reporter from 1985 to 1988 on Channel 4. Johnson continued playing music as he worked as a journalist.

In 1985 he released the album LKJ Live in Concert. The album got a Grammy Award nomination. In 1991 he released Tings An’ Times, a collection of poems which were published partly by LKJ Music Publishers. He produced the LKJ Presents in the year 1996. He created the album with a host of other artists. He doubled up as a reggae artist and poet to the turn of the decade.

In 2002, Johnson published his work with the Penguin’s Modern Classic series. He became the first black poetic artist to achieve the fete. In 2004 he marked his 25th anniversary as a poetic reggae artist. He did a collection of songs in a CD and DVD to commemorate the live concert in Paris.

Politics, music, and poetry have been intertwined in his life. Johnson experienced the evils of racial profiling and segregation early in his life as an immigrant in London. He was inspired by the nationalism of African political figures like William Du Bois from the Caribbean, Julius Nyerere of Tanzania, Kwame Nkrumah of Ghana and Haile Selassie of Ethiopia. Following in the wave of African countries gaining their independence, Johnson joined the vibrant political formations led by the Black Panther Movement.

He used his poetry and musical talents to advocate the rights of the black community in white London. He often attracted the wrath of the white community and Metropolitan Police for his aggressive agitation sometimes bordering a call for armed struggle.

In his musical career, Johnson has received numerous honors and awards. In 1985 he became a distinguished Associate Fellow of Warwick University. In 1987, the Wolverhampton Polytechnic admitted him as an Honorary Fellow. In 1990, the Italian city of Pisa honored him with an award for his contribution to the world of poetry.

Johnson has received honors from institutions of higher learning. In 1998, the city of Livorno gave him a distinguished award for his work in music. His alma mater Goldsmiths College awarded him an Honorary Fellowship. He became an honorary Visiting Professor at the Middlesex University in 2004. In 2005, he got the Musgrave medal awarded by the Institute of Jamaica. The award honored his distinguished input into the poetic world.

As a career poet and musician, Johnson has traversed the globe in his tours. He has performed in Europe, Africa, and South America and as far as Japan. His works in music and poetry have been translated by other publishers and artists into major European languages including German and Italian. Johnson ranks in the league of top reggae poets like Ras Mutabaruka.