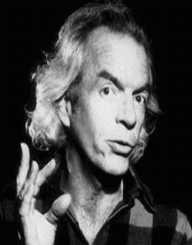 Spalding Rockwell Gray was an American actor and author. Born on June 5, 1941, he gained fame with his impeccable writing and acting skills. Gray wrote and performed in several autobiographical monologues in the theatre between the 1980s and 1990s.

Also, most of his writings have been adapted for films. He achieved great fame with the monologue, Swimming to Cambodia. He released a film adaptation of the monologue in 1987, which he also starred.

Additionally, Spalding Gray adapted his monologues Monster in a Box, 1991, and Gray’s Anatomy into films. A struggle with depression coupled with injuries from a motor accident caused Gray to commit suicide in January 2004.

Spalding Gray was born on June 5, 1941, in Providence, Rhode Island. He the second of three sons by Margaret Elizabeth "Betty" (née Horton) and Rockwell Gray, Sr. His father was the treasurer of Brown & Sharpe. His siblings are Channing and Rockwell, Jr. A member of Christian Science, Betty raised his children in that faith. The siblings grew up in Barrington, however, spent summer holidays in Newport at their grandmother’s house.

Spalding Gray received education at Fryeburg Academy in Fryeburg, Maine. He continued at Emmerson College, Boston, Massachusetts, majoring in poetry. Gray graduated with a Bachelor of Arts in 1963.

His mother committed suicide in 1967, age 52, after suffering a prolonged depression. Gray left for San Francisco, California, in 1965 to work at the Esalen Institute, as a poetry teacher. He settled in New York City after the suicide of his mother in 1967.

Spalding Gray launched a career in theatre while in New York. Subsequently, he joined The Performance Group, an experimental group by Richard Schechter. Together with colleague actors Elizabeth LeCompte and Willem Dafoe, he founded the theatre company, The Wooster Group in 1975.

In addition to his work in the company, he featured in films like Farmer’s Daughter, 1976. He followed it with a role in Maraschino Cherry, 1978 Seven Minutes in Heaven, 1986, and Beaches in 1988. In 1980, he left the company to pursue a monologue career. Gray achieved success with the film adaption of his monologue, Swimming to Cambodia, in 1987.

Spalding Gray had published the book version of the monologue in 1985. The book won him the National Book Award and a Guggenheim Fellowship. Swimming to Cambodia is Gray’s experience in Thailand while filming The Killing Fields, 1984.

In June 2001, while vacationing in Ireland, Spalding Gray had a car accident causing severe injuries. He had a broken hip, severely affecting his right leg as well as a fractured skull. In addition to struggling to recover from the injuries, Gray suffered severe depression. This further worsened his plight and had to undergo several therapies.

From August 2003, he began receiving treatment from neurologist Oliver Sack until he died. A report of Gray’s disappearance came up on January 11, 2004. He had watched the Tim Burton’s film Big Fish, a night before with his children.

Two men discovered his body in the East River on March 7, 2004. According to the Office of Chief Medical Examiner of the City of New York, the men pulled the lifeless body from the river. It is believed he committed suicide, since, he attempted one in 2002. Besides, he was heavily depressed.

In 1991, Spalding Gray married Renée Shafransky, who also became his collaborator. The marriage ended in divorce in 1993. He then married Kathleen Russo from 1994 to 2004. His remains lay at Oakland Cemetery, Sag Harbor, New York.

Spalding Gray's final work was posthumously published as Life Interrupted: The Unfinished Monologue, in 2005. His monologue and journals were adapted for the play Spalding Gray: Stories Left to Tell, in 2007, at the Minetta Lane Theatre in New York City.