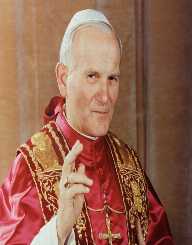 Karol Jozef Wojtyla, who would later be known as Pope John Paul II, was born on May 18, 1920, in Wadowice, Poland. His parents were Emilia (Kaczorowski) and Karol Wojty?a. He also has two siblings, Edmund and Olga.

Jozef Wojtyla was only nine years old, leaving him with just his father and siblings. Tragedy struck again, when his brother, Edmund, died three years later. The family picked up and moved to Krakow, Poland, in 1938. Soon after, he enrolled in Jagiellonian University. While he was there, he studied several languages. He also volunteered as a librarian while studying at the University.

Before Wojtyla was a pope, he was just like anyone else. Pope  John Paul II worked as a playwright. He wrote and acted in plays. He worked with various theater groups during his time as a writer and actor. When World War II broke out in Poland (1939), all able-bodied men needed to get jobs, and playwriting didn’t cut it for Wojtyla. Instead, he worked for a restaurant for some time, and then as a laborer for a quarry, and then later as a laborer in a chemical factory.

Karol Jozef Wojtyla was first looked into becoming a priest in 1942. He earned permission to study religion and began his training in an underground seminary, which was being run by the Archbishop of Krakow, where he was still living at this time. After completing his studies, he was ordained in the Catholic church in 1946, when he was only 26 years old.

He was sent to the Pontifical International Athenaeum Angelicum in Rome to continue his studies with Father Reginald Garrigou-Lagrange. A year later, he earned the title of Licentiate. The next year he also completed his thesis, titled, The Doctrine of Faith in St. John of the Cross. After completing the thesis, he moved from Rome back to Poland.

Once back in Poland, he began to preach in Niegowic (a small village near Krakow). He was moved to Krakow to teach ethics at Jagiellonian University. Later, he taught the same subject at the Catholic University of Lublin. He continued his studies while working, earning a second doctorate (this time in philosophy) in 1954. He continued to work at the University, and he wrote various religious texts. Soon after, in 1958, he began a Bishop. This was a historical moment, as he was the youngest Bishop in all of Poland. After the death of Baziak, he became the Vicar Capitular, in 1962. A year later, Pope Paul VI made him the Archbishop of Krakow.  He continued to work his way up the church's hierarchy and became a cardinal in 1967 when he was 47 years old.

Pope  John Paul II became the 264th pope in 1978, succeeding Pope John Paul I (who had only been the pope for a month before his death). Another historic moment in his life, Pope  John Paul II was the youngest ever pope of the Catholic church. He was a well-loved pope by many people, not just Catholics. He worked tirelessly to bring people all around the world closer. He was more tolerant of Protestants, Jews, Buddhists, and Muslims and popes before him were. He prayed in mosques and respected the Islamic holy book. This made ties with Muslims closer, although closed-minded Catholics did not approve of the pope’s actions.

However, Pope  John Paul II was criticized by some Catholics for some of his tolerant ideas. For example, he respected people who held different religious beliefs, believed in the use of some forms of birth control (condoms), and he considered allowing women to become priests (although this idea never passed into action). He stopped being a pope in 2005, with his death. He was succeeded by Pope Benedict XVI.

Throughout his religious career, Pope  John Paul II wrote seven books, five of which were written when he was the pope. Countless other authors have also written biographies and other stories about him. His books are listed below.

Theology of the Body - Human Love in the Divine Plan
Love and Responsibility
Crossing the Threshold of Hope
Gift and Mystery, On the Fiftieth Anniversary of My Priestly Ordination
The Poetry of John Paul II, Roman Triptych, Meditations
Rise, Let Us Be On Our Way
Memory and Identity: Conversations at the Dawn of the Millennium

Pope  John Paul II was awarded the Presidential Medal of Freedom in 2004.

Pope  John Paul II was beatified towards canonization in 2011 and was canonized as a Saint in the Catholic church in 2014, only nine years after his death.

Pope  John Paul II was diagnosed with Parkinson’s disease in 2001, but this news was not released to the public until 2003. Aside from this disorder, he also suffered from osteoarthritis. As he aged, his hearing became strained, and he developed problems in speaking. He was in and out of the hospital often beginning in February 2005. Pope John Paul II fell into a coma on April 2, 2005, and passed away on the same day due to complications with the coma. He was 85 years old when he passed away. Thousands of people attended his funeral, including kings, queens, and presidents. Millions of others also mourned in Rome. In 2011, his body was disentombed (an event which thousands watched) and his remained were put in front of the altar in Basilica. A few days later, his body was put into a marble tomb in Pier Paolo Cristofori's Chapel of St. Sebastian. His remains are planned to stay there forever.