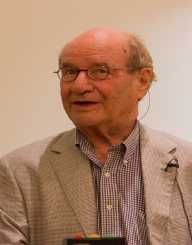 Walter Gilbert is a well-known American scientist in the area of molecular biology, physics, biophysics and biochemist who won the Nobel Prize in the field of chemistry. He is also recognized by his research that entailed the identification of messenger RNA, which led to more inventions in the genetic field. Walter Gilbert is currently eighty-five years.

On the 21st of March in 1932 Walter Gilbert was born in the city of Boston, Massachusetts in the States of America. The parents of Walter Gilbert were Richard V Gilbert who worked as an economist in the process of price administration during the Second World War. His mother was Emma (Cohen) who was a child psychologist. Emma a mother of two gave her children intelligence test and taught them how to read and write at home. The family later left Boston to reside in Washington D.C. where Gilbert joined the local public schools.

When Walter Gilbert was twelve years, he attempted a chemistry experiment which resulted in an explosion and broke apparatus. He ended up with an injured hand. His primary concern was why his operation was unsuccessful.

At a tender age, Walter Gilbert was a member of mineralogical society and an astronomical organization. He studied at Sidwell friend’s high school where he was intrigued by inorganic chemistry and nuclear physics. Walter Gilbert also attended the trinity college and Harvard University, where he graduated with a degree in physics in 1953 and a Master's in physics in 1954. He then proceeded to Cambridge University where he obtained his Ph.D. in physics under the supervision of the Abdus Salam who was also his doctoral advisor in 1957.

In 1956 Walter Gilbert went back to Harvard University where he was appointed as an associate professor in physics and later in 1959 was promoted to become a professor of physics. In 1964 he became a professor of biochemistry. Since Gilbert's wife started working for James Watson, he was captivated by the problems in molecular biology thus begun working in the laboratory with Watson in most of the 1960's.

In 1970 Walter Gilbert developed a process of reading the nucleotide sequence of the DNA segment by using gel electrophoresis. In 1979 he was a co-founder of Biogen, a commercial genetic research corporation, and Myriad Genetics. Gilbert won the Nobel Prize in 1980 for his chemistry work in formulating methods for deducing the sequence of nucleotides in a nucleic acid. He left Biogen and became a chief proponent of the human genome project, an effort by the government to compile and complete map of gene sequence in the person's DNA.

In 1986, he propounded the RNA world thesis for the outset of life. He grounded on the concept first propounded by Carl Worse in 1967.After winning the US steel foundation Award from the national academy of sciences in 1968, Walter Gilbert was nominated as a foreign associate of the royal society of London.

Walter Gilbert has received various Awards including NAS awards in molecular biology in 1968, Nobel Prize in chemistry in 1980, Louisa gross Horowitz prize in 1980, Albert Lasker Award for basic medical research and Gardner Foundation International Award. In the same sequence, he won the Guggenheim fellowship for natural sciences in 1967.

Walter Gilbert has made various contributions to biology. For instance, he was the first to propound the occurrence of introns together with exons and the RNA world thesis, making a breakthrough in mRNA transcription and translation. Gilbert is a pioneer in biotechnology. He is the co-founder of myriad genetics and Biogen.

Walter Gilbert married Celia Stone in 1953 who is a poet, and they have two children, John Richard and Kate. Apart from his being interested in science, he is fascinated by the Chinese cooking and studied ancient arts. Later in life, he learned the skills of playing the piano. He currently resides in Massachusetts in the States of America.

Walter Gilbert aided by several other scientists wrote several papers. Some of them include: 'Climate change and the integrity of science' in 2010, 'Complex early genes' in 2005. Also, he also took part in writing 'The pattern of intron loss in 2005', Do introns favor or avoid regions of amino acid conservation? ( 2002). Some of his previous writing included: 'Centripetal modules and ancient introns' in 1999 and 'Dealing with database explosion' in 1997.

Walter Gilbert has currently gained interest in photography and spends most of his time as a professional photographer, and has had over fifty solo exhibitions around the world.