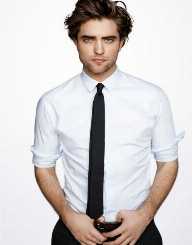 Robert Pattinson was christened Douglas Thomas Pattinson at his birth in the England capital of London. He was born on the 13th day of May in the year 1986.He was already on classical guitar lessons by age five, having taken piano lessons since he was three years old. Robert Pattinson's mother was a worker in the Fashion Industry with a modeling agency while his father was a car importer. Robert schooled at the London-based Harrodian private school while his sister, Elizabeth was also a singer. His other sister was named Victoria. Robert Pattinson was cut out for performing since he took it at quite an early age by singing like his sister. His father prodded him to take to acting and while he looked at this possibility, the days rolled by. While having an outing with his father one day, they were seated next to some young ladies who volunteered to Robert where they spent their evening.

Robert Pattinson picked interest in the conversation when he heard that the ladies were at the Barnes Theater Group earlier on in the day. This became a premiere for Robert after all; he attended the Harrodian School with such rich reputation. Robert stirred up his passion for acting in school and became a member of the school’s theater offering. He was on the set of Anything Goes, Tess of the d'Urbervilles as well as Out Town, while in school.

Robert Pattinson started modeling when he was still a teenager, but years down the line as he became more muscular, the workload dwindled. He attributed the dwindling to his aging and manly features.

Robert Pattinson's role in Harry Potter as Cedric Diggory was his first appearance on the big screen. He was on the cast of The Goblet of Fire which screened in the year 2005. This role was made possible after he met Mike Newell in the last days of 2003. He learned the art of scuba-diving while auditioning for his Harry Potter role.

After his role in the Goblet of Fire for Harry Potter, Robert Pattinson had no more invites and almost was on his way back to London. However, as fate would have it, he caught the eye of Catherine Hardwicke, when auditioned in her bedroom. When Robert got the role of Edward Cullen in Twilight, he was set to make the best of it and to cast a look backward; he realized he did not do much at school. But he was ready to make the most of the opportunity he got.
Catherine was later noted to have remarked that many acts came in for the auditions but was rather shallow. When Robert came in, he turned the trend on its head when put ion the seriousness the role deserved.

Some of Robert Pattinson's earlier roles included playing a painter with a surreal bent in the film, Little Ashes, which was released in 2008. When Robert was announced as the choice for the role Edward Cullen in the Twilight saga, there was opposition. Many buffs of the series garnered up to 75,000 signatures to reject him. Robert was unfazed despite the negative publicity that he was not the right fit for the role.

Robert took the path of hard work to justify Catherine’s confidence in him, and he flew to Oregon months earlier to build his physique with a trainer. He took time to get immersed in the script before the production was to kick off. Robert Pattinson also worked on the movie, “Remember Me,” during the time he was filming for the twin Twilight roles. He was able to take time off on set and used the three days he had between filming either films for the other role.

Robert Pattinson owned up to aspiring to age gracefully like the revered Jack Nicholson. He loves the mannerism and wit of the screen legend. He recalled that he first noticed Jack when he was 13 years old, and he watched him in the 1975 flick, “One Flew Over the Cuckoo's Nest.” Robert dressed up like Jack after that and looked forward to hitting the big screen someday. His other films include Curse of the Ring, The Rover and Maps, and Water for Elephants

The Twilight sequel, New Moon was a runaway box office success as it grossed a record globally to bring in $258 million. This shot the movie to the third place as the most grossing movie in a debut. Robert developed a love interest in his co-star on Twilight set, Kristen Stewart in the year 2008. While on the set of Twilight, he learned to drive in the course of a 10-hour crash driving lesson.

Robert Pattinson had the awards starting with the Most Attractive Man Award in the year 2008 by Hello Magazine. He was also on the list of the Sexiest Men Alive complied by People Magazine in the year 2008. Robert calls himself a fan lover and this he showed when he hosted an obsessed fan to dinner on the day he called his bad day. The singer, Sarah Barry Williams scripted a song which she titled "She wants to be Mrs. Robert Pattinson." His accolades also include the 2009 Best Dressed Man by UK edition of GQ.

Robert also made it to the list of The 100 Most Influential People in the World in the Artist’s category as published by Time magazine in the year 2010. Chris Weitz wrote his tribute. He and Kristen Stewart were awarded the Best Kiss Trophy during the MTV Movie Awards for their on-set kiss in Twilight.

Robert Pattinson dated Kristen Stewart and made it public in 2010, but they soon broke up. He got warmed up to FKA Twigs after that, and they were engaged in April 2015.