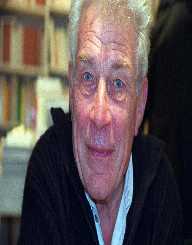 John Peter Berger was born on November 5, 1926, in Stoke Newington, London, England. He was the oldest of two children to his parents Miriam and Stanley Berger. His father was an infantry officer on the Western Front during the First World War, and after the war was awarded the Military Cross and the Order of British Empire.

John Berger attended the St. Edward’s School in Oxford. From 1944 to 1946, Berger served in the British Army. After the end of his service, he went to study at the Chelsea School of Art and the Central School of Art in London.

John Berger first started out his career as a painter. His work was exhibited in several galleries in London during the late 1940s, including the Wildenstein, Redfern and Leicester Galleries. During this time he was also teaching drawing at the St. Mary’s teacher training college.

In later years, he began working as an art critic and published his essays and reviews in the New Statesman. Berger was a controversial figure in the society of London, due to his Marxist humanism views and strong opinions on modern art. He published the collection of essays, Permanent Red as a statement of his political commitment.

In 1958, John Berger published his first novel, A Painter of Our Time. The novel tells a story of the disappearance of Janos Lavin, a fictional Hungarian painter. After his novel was published, he was under pressure from the Congress for Cultural Freedom. His next novels, The Foot of Clive and Corker’s Freedom presented the alienation and melancholy of an urban English life. In 1962, Berger felt dissatisfied with the life in Britain and moved to Haute-Savoie in France.

In 1972, BBC began to publish Berger’s television series Ways of Seeing, at the same time publishing the accompanying text. The work was an introduction to the study of images. In 1972, he published the novel G., a romance set in Europe in 1898. The book won the James Tait Black Memorial Prize and the Booker Prize. After receiving the cash prize for the Booker Award, he donated half of the money to the Black Panther Party in Britain.

After being awarded the mentioned awards, John Berger set his name in the English literature. He also published several sociological writings, such as A Fortunate Man: The Story of a Country Doctor and A Seventh Man: Migrant Workers in Europe. He frequently collaborated with photographer Jean Mohr and began documenting the experiences of peasants. Subsequently, they released a book Another Way of Telling. Berger also wrote studies of artists, like The Success and Failure of Picasso and Art and Revolution Ernst Neizvesny.

During the 1970s, John Berger in collaboration with the Swiss director Alain Tanner wrote screenplays for three films- La Salamandre in 1971, The Middle of the World in 1974 and Johan who will be 25 in the year 2000 in 1976. His biggest work from the 1980s was the trilogy Into Their Labors, which depicts the experience form the European peasants farming roots to the current economic and political displacement and poverty. He founded the Writers and Readers Publishing Cooperative Ltd in London, together with Arnold Wesker, Lisa Appignanesi, Christ Searle, Glenn Thompson and several other authors. The cooperative was active from 1974 until the early 1980s.

John Berger’s essays mostly focused on photography, art, politics and his memories. He also published one volume of poetry, Pages of the Wound, but several of his essay collections also contain poetry. One of his last novels, To the Wedding, tells a story about love and dealing with the AIDS crisis. His novel From A to X was listed for the 2008 Booker Prize. His latest work has been a collection of essays Confabulations in 2016.

John Berger was married three times. His first marriage was to artist Patt Marriott in 1949. The couple divorced, and in the mid-1950s, he married Anya Bostock. The couple had two children – Katya and Jacob, who became a film director and screenwriter. Berger and Bostock divorced in the mid-1970s, and soon after he got married to Beverly Bancroft, with whom he had a son, Yves. The couple remained married until Beverly’s death in 2013. John Berger died in his home in France on January 2, 2017.