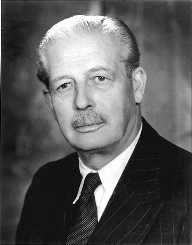 Anthony Eden was a British Conservative who held the position of Foreign Secretary thrice in his political career. He served as the Prime Minister of the United Kingdom from 1955 to 1957, a term of only two years. He succeeded Winston Churchill after he ably deputized him for almost fifteen years. He later won the general elections making him the official Prime Minister of the United Kingdom.

Anthony Eden rose to the dominant position of British Foreign Secretary during the period of World War 2 and the cold war. His decisions were very impactful during this period. In 1956, Anthony Eden's reputation as an expert diplomat was diluted when the United States declined to endorse the Anglo-French military response to the Suez Crisis. This dealt a blow to the British Foreign Policy.

Anthony insisted that the primary method of reversing Nasser's decision to nationalize the Suez Canal was to remove him from power. However, the failure of the United States and other countries to support a military removal of Nasser from power depicted him as an undiplomatic Prime Minister. He afterward ordered a stop to the Suez Canal operation. He resigned two months after ordering the end of the process citing ill health.

Anthony Eden's success as the Prime Minister of the United Kingdom is largely measured by the way he handled the Suez Crisis depicting him as the least successful British Prime Minister. He, however, had successful terms as the British Foreign Secretary.

He had two brothers, John and Nicholas, who died during the First World War. Eden served with 21st Battalion of the King's Royal Rifle Corps during the war. He rose up the ladder and reached the captainship of the battalion.

After the war, Eden graduated from the Christ Church, Oxford with a Double First in Oriental Languages.

He did not confess his love for politics at his youthful age. However, his letters and diaries showed an obsession with politics.

Anthony Eden was first enrolled at Sandroyd School in Cobham in 1907. He left the school in 1910 having scored poorly in all sectors apart from languages which he scored excellent grades.

In January 1911, he started at the Eton College. While in college, he won Divinity Prize and did amazingly well at cricket, rugby, and rowing. He won house colors for rowing.

Eden learned French and German during his holidays and at one point spoke better in French than English.

Anthony Eden began his political career in 1922 where he contested for a seat in Spennymoor using the conservative ticket. When the results of the November 1922 general election were released, Eden lost to the Labor candidate.

On December 1923, Anthony Eden was elected to the House of Commons as a Conservative. He was only twenty-six years when he won the seat.

In the House of Common, Eden started shaping the course in foreign policies and, at one point spoke urging Anglo-Turkish friendship. He argued that it was necessary to ratify the Treaty of Lausanne.

In the Conservative government of 1924-1929, Anthony Eden was appointed the Parliamentary Private Secretary to Home Secretary, William Joynson-Hicks. In 1926, he was elected to the Foreign Office in the same capacity where he worked under Foreign Secretary, Sir Austen Chamberlain. It is while in the foreign office that his prowess in sensitive matters was nurtured to its maturity.

Anthony Eden was also a journalist and a writer. In 1926, he published a book "Places in the Sun" focusing on the critical effects of socialism in Australia.

In 1928, Chamberlain went on a retreat to recover his health. At this time, Eden gave a keynote speech for the government in a debate on Anglo-French naval covenant in response to the Leader of Opposition.

Anthony Eden lost the 1929 general election and remained in the opposition until 1931 when he was appointed Foreign Affairs Minister in the government headed by Prime Minister, Ramsay MacDonald.

In December 1933, Eden was appointed to the Office Minister for League of Nation Affairs, a position that coupled with Lord Privy Seal.

In 1935, he replaced Sir Samuel Hoare as the Foreign Secretary after he resigned due to the failure of the Hoare-Laval Agreement. Eden had shown reservations on Hoare's policy on Nazi Germany and Fascist Italy.

Eden served as the Foreign Secretary until 1938 when he resigned due to dissatisfaction with a policy of appeasement that Chamberlain had brought forth.

Eden became the Deputy Leader of the Conservative Party and served in the opposition between 1945 and 1951.

In 1951, Conservative Party returned to power, and he was appointed the Foreign Secretary and also took over as the Deputy Prime Minister.

In 1955, Eden succeeded Winston Churchill following his retirement, as the Prime Minister. Anthony Eden resigned from the position of Prime Minister in 1957 after mishandling the Suez crisis. He cited health reasons for resignation.

As the Foreign Secretary of States, Anthony Eden diplomatically successfully solved many disputes including Anglo-Iranian oil dispute, Indochina war and the quarrel between Italy and Yugoslavia over Trieste.

Anthony Eden married Beatrice Beckett in 1923. They had three sons. One of the sons died while he was a child. The couple divorced in 1950 after strains resulting from loss of their son during World War 2.