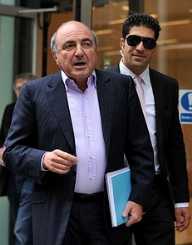 Boris Berezovsky was a renowned Russian entrepreneur and government official, mathematician, and engineer. Boris was part of the Russian Academy of science. As a politician, he was a staunch critic of President Vladimir Putin. Since the time Putin was voted in during the 2000 election,  Boris Berezovsky was always outspoken about his dislikes regarding Putin’s leadership.

Boris Berezovsky made a significant portion of his fortune during the 1990’s when Russia underwent privatization of state property, whereby he gained many significant assets. In 2000, Boris was summoned by the deputy prosecutor for questioning but moved to Britain, where he was granted political asylum.

Boris Abramovich Berezovsky was born on 23rd January 1946, in Moscow. His parents were Abram Markovich Berezovsky and Anna Alexandrovna Gelman. Abram was a professional Jewish engineer and worked in construction works. He often insisted that he was Jewish although this is not possible by orthodox Jewish laws since his maternal grandmother was not Jewish.

Boris Berezovsky attained education in applied mathematics, and pursued his education further to a doctorate in 1983, from Moscow Forestry engineering Institute in 1968. After graduation, Boris got a job as an engineer. During the period in between 1969 and 1987, he worked as an assistant research officer and was later promoted to the research officer position. Then, he served as a department head in the `Institute of control sciences.’

Boris Berezovsky was a natural entrepreneur. In 1989, he took full advantage of the opportunities as a result of his association with LogoVAZ and AvtoVAZ. LogoVAZ had formulated a software for AvtoVAZ, who marketed and sold cars that were made in the Soviet Union, and serviced foreign vehicles.

In 1993, Boris Berezovsky founded All Russia Automobile alliance in association with Alexander Voloshin and Vladimir Kadannikov, who was AvtoVAZ’s chairman. He was responsible for about 30% of the company and raised funds of about 50$ from small investors, aiming to start a project to build a car processing plant, but was not successful.

In 1994, Boris Berezovsky survived an assassination attempt through car bombing where his driver was killed. Instigation later linked the effort to the Soviet-era AvtoVAZ management and was believed to have been as a result of his increased influence in the automobile market. During the same year, Boris attained ownership of ORT television, and selected famous anchorman named Vladislav Listyev as CEO of the media company.

However, Listyev was assassinated, the reason believed to have been the rivalry in control of advertisement sales. Under him, the OTP became a vital asset for the reformist groups at the time, who tried to gain force to face nationalist and communists in the next presidential elections.

In the period between 1995 and 1997, there were privatization auctions that involved loans-for-shares. Berezovsky in association with patarkatsishvili then helped Roman Abramovich to gain control of Sibneft, which is a significant Russian oil company.

Boris Berezovsky befriended Russian president Boris Yeltsin's bodyguard and his daughter. This enabled Boris to achieve entry into the Kremlin. Due to this, Boris gained control of the former Soviet state airline, named Aeroflot and in 1995, he played a significant role in reshuffling the management and corporatization of the carrier.

The following year, Boris Berezovsky aided Bankroll Yestin to be able to resume his position as president during the elections. Following this, he was appointed as `deputy secretary of the security council’ and later executive secretary of the `commonwealth of independent states.’

Yeltsin then resigned in 1999. His resignation cost Berezovsky his position as an insider in Kremlin. Vladimir Putin later came to power in 2000, and one of his agendas was to `liquidate the oligarchs as a class.’ As a result of Putin’s determination to reassert state control, it was only a matter of time before he came into conflict with Berezovsky, who had gained a lot from the privatization.

Boris  accused Putin getting back to totalitarianism, and formed an organization he named `Constructive opposition.’ At the time, he claimed the Kremlin threatened him demanding that he should surrender ownership of the ORT. However, Boris distributed his shares to a couple of journalists and writers that he had picked himself.

In 2000, an investigation was launched which aimed to review his handling of Aeroflot’s finances. By then, Boris Berezovsky had been completely ousted from Kremlin’s inner circles. As a result, he feared arrest and resulted in relocating to Britain.

In December the same year, Boris Berezovsky announced that he was formulating a multi-dollar foundation. He revealed that the primary objective of the organization was to enhance judicial reform and promote the growth of civil society in Russia. In exile, he kept on being outspoken about his contrary opinions with the Russian government.

Boris Berezovsky went as far a sponsoring Putin’s opposition and call out for a coup de tat. In 2003, the Russian government pressed several charges against him and handed in a request for Berezovsky’s extradition. However, this did not happen, and he was granted asylum by Britain later during the same year.

In 2007, a Russian court held a trial in absentia for him and declared him guilty of embezzling from Aeroflot. In 2008, Boris took to the court in a business suit against Roman Abramovich. He claimed Abramovich prompted him to sell his shares in the billionaire’s oil company Sibneft. The case was one of its kind, being the largest private court case in the history of British judicial system. However, the suit was dismissed in August 2012, whereby he was declared dishonest, leading to him paying Abramovich legal fees of more than $50 million.

Boris Berezovsky was found dead on 23rd March 2013, at his home at Sunning hill in Berkshire, England. His death was subsequently classified as `unknown’ though some reports claim he committed suicide.