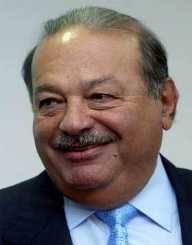 Carlos Slim is a Mexican magnate, ranked by Forbes Magazine as one of the richest and most powerful men in the world. Likened to King Midas by the national press, he built his fortune through the acquisition of many different businesses, which come together in the conglomerate Grupo Carso. This business aggregate has stakes in a diversity of industrial sectors, including real estate, construction,  telecommunications, transportation, media, and energy. Today, the 77 year old businessman has delegated some responsibilities of the daily running of Grupo Carso to his children, but still actively participates as head of the Telmex branch, the biggest telecommunications company in Mexico.

Carlos Slim Helú was born in Mexico City on January 28, 1940 to parents of Lebanese descent. His mother, Linda Helú Atta, was the daughter of Lebanese immigrants. His father, Julián Slim Haddad, was a Lebanese immigrant who came to Mexico when he was 14 years old to avoid being drafted into the army of the Ottoman Empire. Together, they had six children, of which Carlos was the fifth: Nour, Alma, Julián, José, Carlos and Linda.

Julián Slim was a prolific businessman, and imparted his business savvy to his children. Carlos Slim learned his first financial lessons from his father, who showed them how to keep a log of their income and expenses. When he was just 12 years old, he opened his first checking account and bought shares of the Mexican National Bank.

Slim went on to become a civil engineer, studying in the National Autonomous University of Mexico (UNAM), from where he graduated in 1961. While he was still a student there, he taught Algebra and Linear Programming. After graduation, in 1965, he founded his first company, Inversora Bursátil. He then proceeded to buy several companies, mainly in the real estate and construction sectors.

Later on, in 1980, he created Grupo Galas, which brought together all his different companies. At that time, the group’s business holdings were primarily in industry, mining, construction, commerce, food and tobacco. Grupo Galas was later renamed Grupo Carso as it is still known today. The name Carso comes from the combination of the magnate’s name, Carlos, and that of his wife, Soumaya.

In 1982, the Mexican economy underwent a serious crisis due to falling oil prices and a big public deficit. Slim started investing in and buying Mexican companies, making them prosper again. All of these were united under the umbrella of Grupo Carso. Then, in 1990, he acquired Telmex, the company which controlled all telecommunication services in Mexico, from the government. From then on, he started expanding his stakes in the telecommunication industry, slowly increasing his reach throughout Latin America, and extending into the United States. In 2014, Slim acquired Telekom Austria, his first foot in the industry in Europe. Nowadays, the informatics and telecommunications sectors are high in Grupo Carso’s list of priorities.

In 2008 Slim began acquiring stock from the New York Times Company. Starting with 6.4% of the shares, he has gradually increased his holding to 16.8%, with a value estimated at over $300 million dollars. These days, it has been estimated that Slim’s empire includes more than 180 companies, and holds shares in over 40 more.

Slim married Soumaya Gemayel Domit, a young girl of Lebanese descent, in 1967. They had six children: Carlos, Marco Antonio, Patrick, Soumaya, Vanessa and Johanna. Soumaya Domit died in 1999 from kidney failure, making Slim a widower. They had been married for 33 years.

Carlos Slim is a man of strong family values. Growing up, his family was always very close and caring, and it is something he and his wife passed on to their own children. Today, Slim considers his six children “his best friends” and makes a point of getting together with them every Monday for dinner, where they discuss various topics alongside well known figures of the arts, science, and politics. In spite of gossip linking him to other women, Slim has no intention of remarrying. He has been quoted as saying that he already has a wonderful family and sees no reason to ruin it by making a new one.

Slim was born into a Catholic family and is himself a Maronite Catholic, a branch of the Eastern-rite Catholic Church. According to Diego Enrique Osorno, who wrote a lengthy biography of the Mexican magnate, Slim doesn’t consider himself leaning to either left of right regarding politics.

He leads a simple life considering his vast fortune. He is not fond of lavish displays of wealth and doesn’t have a personal driver, opting to drive his own cars instead. He also doesn’t have a computer, and instead keeps his financial records in notebooks.

In 1997 he underwent heart surgery in the Texas Heart Institute and nearly died. After recovering from this incident, he decided to pass on many of his daily business responsibilities to his three sons, although he still retains control over most of the final decisions.

As of February 17, 2017, Forbes magazine estimated Slim’s net worth at 51.2 billion dollars. He is the richest man in Mexico and number 4 among the billionaires of the world. In addition, he is #17 on the list of the World’s most powerful people. Furthermore, between 2010 and 2012, he was consecutively ranked as the richest man in the world, surpassing other notorious multi-millionaires such as Bill Gates and Warren Buffett.

Carlos Slim is a big fan of sports, particularly baseball, but also track and field and football, which he played when he was young. In fact, he has been a big patron of the sports in Mexico and was twice awarded the National Sports Award.

Slim and his foundations have been involved in a variety of philanthropic efforts. He is a known supporter of the arts, sports, and the development of Mexican human potential. He has also invested heavily through his foundations in the protection of biodiversity and the sustainable development of the country. Some of his most important works include:

Slim is somewhat of a controversial figure in Mexico, given his immense fortune. It has been estimated that he earns around $2.11 million dollars per hour, in a country in which approximately  55.3 million people live in poverty (about 46.2% of the population). It has also been pointed out that his humanitarian and altruistic efforts are lower than those of other billionaires, like Bill Gates. To this, he has responded that he is against giving money away, claiming not to be “Santa Claus”. Instead, he prefers to invest it in a way that will create new jobs and generate even more money.

Furthermore, critics also claim that Slim’s holdings constitute monopolies. In 2014, the Federal Telecommunications Insitute declared that America Movil, of which Slim is president, was a monopoly in the telecommunications sector. Several measures were imposed to regulate the activity of the company, but some critics are still not convinced that these are being implemented.

Carlos Slim has been awarded many honors and distinctions throughout his carrier. Among the most memorable ones are: