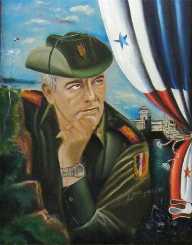 He was never officially the president of Panama as he entered into power through a coup de tat. He held titles such as ‘Maximum leader of the Panamanian Revolution’ and ‘Supreme Chief of the Government.’ He is also known to have entered into several treaties with the United States and other countries as well such as the 1977  Omar Torrijos Carter Treaties that gave Panama complete sovereignty over the Panama Canal. He died on July 31, 1981.

Omar Torrijos was born on February 13, 1929, in Santiago in the province of Veraguas, Republic of Panama. He was brought up alongside ten siblings. He was born to Jose Maria Torrijos who was a teacher and his wife. He attended Juan Demostenes Arosemena School for his secondary education. He later won a scholarship to a military academy in San Salvador. He graduated from the military academy as a second lieutenant.

In 1952, Omar Torrijos joined the National Guard. The National Guard was the name of the Panamanian army. In 1956, he was promoted to captain, and after three years he became a major. In 1965, he took a cadet course at the US Army School of the Americans in Georgia. In 1966, he became the Executive Secretary of the National Guard and later on the lieutenant colonel.

In 1968, Omar Torrijos was sent to El Salvador as a military attaché after he was involved in election rigging. In the same year he and his friends, Jose Ramos and Major Boris Martinez planned a coup de tat against the newly elected president, President Arias Arnulfo. The coup was successful, and President Arias was ousted from the presidency.

He and Demetrio Lakes wanted to reestablish the government, and so they sought to replace the exiled president with his deputy, Raul Arango. Instead of Raul, Jose Marla was made the provisional president of Panama, but the reestablishment still had a lot to do with Omar Torrijos and Martinez as they dictated the newly formed junta.

Later on, Omar Torrijos was appointed the commander of the National Guard. With his position, he instituted a military rule in the country by taking over the press, the legislature, and all political parties. In 1969, in his position again he sent Martinez and Jose Ramos into exile. He held all powers of the government even though Demetrio Lakas was made the head of state.

In 1972, he ordered elections where the Assembly Community Representatives approved the birth of a new constitution and the appointment of Lakas as the president of Panama. In 1977, he initiated the Torrijos Carter Treaties with United State’s President Jimmy Carter who saw Panama have complete sovereignty of the Panama Canal. In 1978, he appointed Aristides Royo as the president of Panama. In the same year, he also announced his retirement.

Omar Torrijos did not fully retire as he still controlled the president, but his reign was a bit flexible. His reign at the point allowed citizens to enjoy some civil liberties. In 1979, he founded the Democratic Revolutionary Party which followed socialist ideals. He was a dictator but he made some reforms during his reign, and they include creating employment opportunities, giving land rights to farmers, establishing schools for the underprivileged in the society and making changes to the constitution to accommodate even the disadvantaged.

In 1954, Omar Torrijos married Raquel Pauzner with whom he had three children. He has an illegitimate son called Martin who in later years became the president of Panama. On July 31, 1981, he died in a plane crash close to Penonome in Panama.