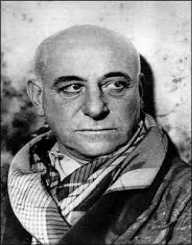 French poet, critic and artist Max Jacob was born on the 12 July 1876 into a middle-class family Quimper in Brittany, France. His father owned an antique shop and was also a tailor.

Max Jacob was raised in Quimper and studied at the College La Tour-d’Auvergne. He moved to Paris to study law at the Paris Colonial School (1894-1896). Later he dropped out to pursue a career as an art critic.

In 1897, Max Jacob moved to the Montmartre district of Paris, France and by 1899 had started painting as well as writing poetry and prose. He supported himself doing various clerical jobs but was always short of money. Around this time, in 1901, he met Pablo Picasso who admired his poetry. The two men became friends and Jacob was part of the avant-garde bohemian artistic community.

Jacob saw himself primarily as a poet, and The Dice Cup (1917) established his reputation. He also wrote novels and plays. His paintings were exhibited in Paris and New York City. He had two exhibitions in New York: in 1930 and 1938.

Max Jacob was born into a Jewish family but later converted. He claimed that he had seen a vision of Christ which led to his conversion. In 1921, he moved to a Benedictine monastery at Saint-Benoît-sur-Loire, Loiret, where he lived until his arrest by the Gestapo. His brother, sister, and brother-in-law were all deported to Auschwitz Concentration Camp where the Nazis killed them.

After being betrayed by his neighbours, Jacob was arrested on the 24 February 1944. While in a holding camp in Drancy in preparation for transportation to a concentration camp, Jacob contacted bronchial pneumonia and died on the 5 March 1944. Many of his famous friends had tried to intervene on his behalf, including by Jean Cocteau. His first biographer was Andre Billy who published Max Jacob (1946).