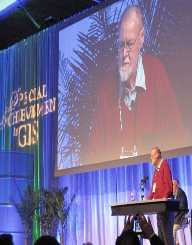 Roger Tomlinson was a British geographer known as the inventor of modern computerized geographic information system (GIS). Born on November 17, 1933, he is regarded as the father of GIS. His invention led to the technological development in satellite mapping and the global positioning system, GPS and further innovations like the Google Maps.

Roger Tomlinson was mandated to serve a three-year National in the military which Roger Tomlinson served from 1951 to 1954. However, his dream of joining the Royal Air Force proved futile due to his body size. This was because of his size unable him to fit in a jet with ejection seats hence had to join the ground base. After his service in the army, Roger Tomlinson enrolled at the University of Nottingham and later Acadia University for separate undergraduate study geography.

He gained a scholarship from the McGill University for his master’s degree in the glacial geomorphology of Labrador. He had his Doctoral thesis at the University College of London titled, The application of electronic computing methods and techniques to the storage, compilation, and assessment of mapped data.

After completing his education, Roger Tomlinson gained employment at the Spartan Air Services in Ottawa, Ontario as a manager of the computer mapping division in the 1960s. It was during his time here that he developed the idea of combining land mapping with new emerging computer technologies. This initiative he plans and directs the development of the Canada Geographic Information System being the world’s first computerized GIS. Roger Tomlinson also served as an assistant professor at Acadia. Roger Tomlinson also worked at the Department of Forestry and Rural Development as a consultant and later as the director of regional planning systems.

Roger Tomlinson received several awards and honors for his works. He was awarded James R. Anderson Medal of Honor for Applied Geography in 1995, Robert T. Aangeenbrug Distinguished Career Award in 2005, GIS World Lifetime Achievement Award for a lifetime of work with GIS, 1996, the Alexander Graham Bell Medal of the National Geographic Society among several others.

Roger Tomlinson was married twice first to Jocelyn that ended in divorce. He then married Lila Blanchard, and that lasted for 45 years. Roger Tomlinson had three children and four grandchildren. On February 9, 2014, he suffered a heart attack and died at age 80.