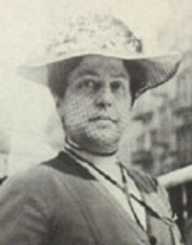 Lillian D. Wald was born on March 10, 1867, in Cincinnati, Ohio. Her parents were both German-Jewish immigrants. Her father worked as an optical dealer. In 1878, she and her family moved to Rochester, New York.

Wald was educated at the Cruttenden’s English-French Boarding School and the Day School for Young Ladies. When Wald was 16 years old, she applied to study at the Vassar College but got rejected because of her young age. She then decided to study nursing and graduated the New York Hospital’s School of Nursing in 1891. After graduating, she took classes at the Woman’s Medical College.

After her training, Lillian D. Wald went to work at the New York Juvenile Asylum. In 1893, she left medical school and began teaching nursing to poor immigrant families at the Hebrew Technical School for Girls in New York. Meanwhile, she also began taking care of the sick in Lower East Side. This experience led her to create the term “public health nurse.”

In 1893, Wald formed the non-profit social service agency Henry Street Settlement. The institution attracted the attention of Jacob Schiff, who provided Wald with money to help her provide for the “poor Russian Jews.” By 1906, Wald’s institution had 27 staff nurses, and she had obtained more sponsors. By 1913, the institution already had 92 people on staff, and it eventually developed as the Visiting Nurse Service of New York.

Lillian D. Wald was an advocate for nursing in public schools and presented her ideas to New York Board of Health. She became the first president of the National Organization for Public Health Nursing, the first public nursing system in the world. She also established an insurance partnership with Metropolitan Life Insurance Company. Wald was also involved in founding the Columbia University School of Nursing.

Besides her work as a nurse and public health advocate, Lillian D. Wald was also involved in community work. She often taught women to sew and cook and provided options for recreational activities to families. She was also an activist in the labor movement, concerning herself most with women’s working conditions. In 1903, Wald became one of the founders of Women’s Trade Union League. In 1910, she went on a six-month tour to Japan, China, Russia and Hawaii for a mission related to humanitarian causes.

In 1915, Wald continued her outstanding work by founding the Henry Street Neighborhood Playhouse. She was also the leader of the Child Labor Committee in its early years. In the 1920s, the group proposed an amendment in constitution banning child labor, but it was not approved. Wald was also an active civil rights movement supported and became a founding member of the National Association for the Advancement of Colored People.

Lillian D. Wald was never married and throughout her life continued to be in close relationships only with women. It was revealed in her correspondence that Wald had intimate affection towards her companions Mabel Hyde Kittredge and Helen Arthur.

Lillian D. Wald died on September 1, 1940, after a sudden cerebral hemorrhage. In 1970, she was elected to the Hall of Fame for Great Americans.