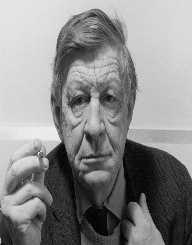 Wystan Hugh Auden was an English born American poet and man of letters. Born on February 21, 1907, his works encompassed various themes including politics, social, religion, and morals. Auden achieved great success and fame as a leftist during the Great Depression. His debut book, Poems, 1930, followed by The Orator, 1932, brought him to the limelight. In addition, his famous works include Funerals Blues, September 1, 1939, and The Shield of Achilles. Others are The Age of Anxiety, For the Time Being, and Horae Canonicae.

Wystan Hugh Auden was born on February 21, 1907, in York, English. He was the third son to Constance Rosalie and George Augustus Auden. His father a physician and mother a trained missionary nurse. His two older brothers George Bernard Auden became a farmer and John Bicknell Auden a geologist. When he was a year old, the family moved to Homer in Solihull, Birmingham where his father became a School Medical Officer and Professor of Public Health.

Auden received early education at St Edmund’s School. Hindhead, Surrey. While there, he met his later collaborator and novelist Christopher Isherwood. He continued his education at Gresham’s School, in Norfolk in 1922. He made friends with Robert Medley, who provoked Auden’s interest in poetry. Growing up, Auden wanted to become a mining engineer; however, his love for literary works was stronger. Therefore, he settled on becoming a poet and academician. His maiden published poems appeared in Gresham’s school magazine. After graduating, he enrolled at Christ Church, Oxford University. He initially meant to study biology, however, switched to English in his sophomore. He graduated with a third-class degree in 1928.

After graduating from the University, Auden moved to Berlin, where he spent nine months. The economic and political unrest in Berlin at the time became one of his main subjects. Following his return to Britain, 1929, he briefly picked a teaching job. The following year, Faber and Faber published Auden’s first book entitled Poems. Faber and Faber would since remain his British publisher.

From 1930 until five years later, Auden picked teaching jobs in some boys schools. He taught at the Larchfield Academy, in Helensburgh for two years. Afterward, he taught at the Downs School, in the Malvern Hills, where he spent three years. While there, he experienced what he called “Vision of Agape” in June 1933. He was at the time sitting with three colleague teachers when suddenly, he discovered that he loves them for themselves. He also saw that their presence was valuable for him. The experience according to him informed his decision to return to the Anglican Church in 1940. He later worked as a freelance essayist, reviewer, and lecturer until he left for the US in 1939.

Auden’s three months travel to Iceland in 1936, produced the travel book Letter from Iceland in 1937. It was in collaboration with his Louis MacNeice. He also collaborated with Benjamin Britten on plays, libretto and song cycles. The Group Theatre performed his plays in the 1930s.

Auden and Christopher Isherwood built both professional and sexual relationship. The two spent six months in China in 1938 working on the book Journey to a War, 1939. In January 1939, they moved to the United States settling in New York on a temporary visa. The movement to the US damaged Auden’s reputation as many saw it as a betrayal. Their last collaboration work was On the Frontier.

Work in the US

While in the US Auden parted ways with Isherwood, and later built a relationship with poet Chester Kallman. The two dated for two years. He taught English at the University of Michigan from 1941 to 1942. Awarded a Guggenheim Fellowship for 1942-43, Auden abandoned it to instead teach at Swarthmore College from 1943 to 1945. Also, he taught at The New School for Social Research and became a visiting professor at Bennington College and Smith College among others. He naturalized for the US in 1946. From 1956 to 1961, Auden served as a Professor of Poetry at Oxford University, lecturing three times a year. In addition, he also wrote for The New York Review of Books and The New Yorker.

In all, Auden published around 400 poems. His works varied in style encompassing the somewhat vague twentieth-century modernism to coherent traditional forms. In addition to poems, he wrote essays on history, literature, music, politics, and religion among others. His works include Paid on Both Sides, 1928, The Orators: An English Study, 1932, and The Dance of Death in 1933. Subsequent works include the play The Ascent of F6, 1937, Another Time, 1940, and The Double Man in 1941. Other works include The Enchafèd Flood: The Romantic Iconography of the Sea (1950), The Shield of Achilles (1955), The Dyer's Hand (1962), City Without Walls (1969), and Epistle to a Godson (1972).

W.H. Auden died at the Altenburgerhof Hotel in Vienna, Austria, on September 29, 1973. He was 66. Auden was buried in Kirchstetten.