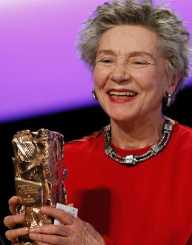 Emmanuelle Riva was an award-winning French actress. Born on February 24, 1927, she came to fame with her roles in Hiroshima mon amour,1959, which earned her a BAFTA Award nomination. Her role as Anne Laurent in Amour, 2012, won her a BAFTA Award and Cesar Award and gained a nomination for an Academy Award. In 1954, she performed her first role on stage in a Paris production of George Bernard Shaw’s Arms and the Man. In 1962, she played in Therese Desquevroux, winning Best Actress at the Film Festival for the role.

Emmanuelle Riva was born on February 27, 1927, as Paulette Germaine Riva in Cheniménil, France. She was born to an Italian father René Alfred Riva and Jeanne Fernande (nee Nourdin). Her mother was a seamstress and her father a sign painter. She was raised in Remiremont. Growing up, Emmanuelle Riva had a strong passion for acting and started performing in plays at a local theatre. Emmanuelle Riva also took over her mother’s profession as a seamstress at an early stage whiles she still had acted at heart.

To pursue her passion, Emmanuelle Riva applied to an acting school in Paris after seeing an advertisement in a local paper. She moved to Paris to pursue her dreams of becoming an actress despite her parent's disapproval. She was 26 years at that time.

Emmanuelle Riva's first acting role was on stage in the George Bernard Shaw production of Arms and the Man in 1954, in Paris. She made her screen debut in 1957 in the TV series, Énigmes de l'histoire. She occasionally appeared on French television co-starring and playing lead roles. She was a published poet as well.

Emmanuelle Riva played the lead role in Alain Resnais film Hiroshima mon amour in 1959. The part earned her a nomination for Best Foreign Actress at the BAFTA Award in 1960. She went on to appear in Gillo Pontecorvo’s Kapò, 1960, and in Jean-Pierre Melville’s Léon Marin, Priest in 1961. The following year she again performed in Georgees Franju’s Thérése Desquevroux for which she won the Volpi Cup for Best Actress at the 23rd Venice International Film Festival. Riva starred in Three Colors: Blue, 1993, Venus Beauty Institute, 1999 and in Skylab in 2011.

In 2012, Emmanuelle Riva starred in the famous film Amour alongside Jean-Louis Trintignant, directed by Michael Haneke film. The film won several nominations in the 2013 Academy Awards including Best Picture, Best Actress, Best Director and Best Original Screenplay. Her nomination for Best Actress made her the oldest actress to be nominated for the award at age 85. She won the BAFTA Award for Best Actress in a Leading Role.

Emmanuelle Riva neither married nor had children but had a partner who later died. She had a fourth-floor walk-up apartment owned by her in Latin Quarter of Paris.

Emmanuelle Riva died on January 27, 2017, some few weeks to her 90th birthday from Cancer. A memorial service was held at Saint-Germain de Charonne church in the 20th arrondissement of Parison February 4, 2017. Emmanuelle Riva was buried in Charonne cemetery.