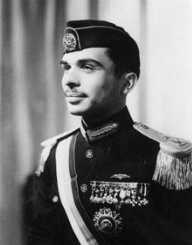 On November 14, 1935, Hussein bin Talal was the King of Jordan forms1952 till his death in 1999. Hussein bin Talal took over the throne at age 17 after his dad King Talal resigned. His foremost ambition was to create suitable living conditions for Jordanians and did that through building a strong economy and industrial infrastructure to create jobs and also make Jordan self-sufficient.

Hussein bin Talal made great interventions in terms of education, sanitation, extended of water and electricity to benefit most of the populace and his reign Jordan saw the drop in infant mortality according to statistics of the UNICEF. His reign was able to withstand the Cold War and in 1994 became the second Arab leader to recognize Israel. Hussein bin Talal built strong international relations between Jordan and other countries and tried to foster peace with Israel.

Hussein bin Talal was born in Amman to King Talal bin Abdulla and Princess Zein al-Sharaf bint Jamil. He had his elementary education in Jordan and later traveled to Alexandra, Egypt to school at the Victoria College. In England, Hussein bin Talal enrolled at the Harrow School then finally to the Royal Military Academy Sandhurst. Prince Hussein was with his grandfather King Abdullah I on July 20, 1951, at the Al-Aqsa Mosque, Jerusalem for Friday prayers when a Palestinian assassin opened fire on them leaving King Abdullah I dead, but Hussein survived.

According to reports, Hussein bin Talal was saved by a medal on his uniform which deflected a bullet targeted at him. King Abdullah’s first child Talal who was Hussein’s father then became King of Jordan while Hussein also became the Crown Prince on September 9, 1951. However, just thirteen months into the reign of King Talal, Hussein bin Talal was diagnosed with schizophrenia and Crown Prince Hussein bin Talal was to succeed him. On August 1952, he was named as King, but since he was 16 then, a Regency Council was appointed until May 2, 1953, age 17 when he was enthroned.

After King Hussein bin Talal ascended the throne in 1953, Hussein bin Talal worked his way out to declare Jordan an independent state in 1956. Hussein bin Talal the replaced all high ranking officials like Glubb Pasha and other British officers. Hussein bin Talal was bent on achieving regional peace and also Jordan being at peace with Israel with series of meetings with then Israel foreign minister Abba Eban and Golda Meir from 1963 at this time several Arab countries shared a different view and were at war with Israel.

With the invasion by Israel, Jordan lost control of the West Bank, and their military was disorganized. Also, Palestinians who had also fled war and made it to Jordan as refugees between 1948 and 1967also started to undermine the ruling of King Hussein since they were many and at the time outnumbered the natural Jordan citizens. They formed the Palestine Liberation Organization used in fighting. Sensing looming danger, King Hussein bin Talal order their expulsion which also led several other Palestinians to flee to Lebanon. King Hussein further avoided joining any kind of agreement to save Jordan from other attacks from Israel.

Improving The Lives Of Jordanians

Aside from seeking regional peace he was a very responsible leader and ensured the betterment of the Jordanian citizens. He was able to improve upon the infrastructural and economic needs of the country. Some prominent social interventions projects were in regards to water, sanitation, and electricity which he improved from the 10% coverage he met to 99%. Hussein bin Talal also ensures a high literacy rate from 33% in 1960 to 85.5% by 1996. King Hussein bin Talal also decreased the infant mortality rate by almost half.