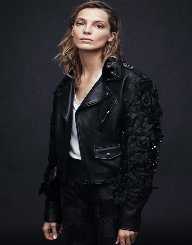 Daria Werbowy is a Ukrainian-Canadian model.

Daria Werbowy was born in Krakow, Poland to Daniel and Anna Werbowy on 19 November 1983. Shortly after her birth, they moved to Ontario, Canada. She has dual citizenship with Canada and Ukraine. She is the last of three children. Her elder brother, Orest is the first followed by her sister, Oksana.

At the age of fourteen, Daria Werbowy was 5 feet 11 inches and willowy. Her schoolmate’s mom who ran the Toronto arm of Susan J. Modeling and Talent Agency introduced her to the business, and she won a National modeling contest. Before this time, she never gave modeling serious thought.

Daria Werbowy switched to Elite Modeling Agency in Canada. During this period, she did a lot of gigs. There was, however, no real progress on the international scene. Consequently, she moved to London and Greece. She didn’t find a lot of work there. She had a shoot canceled because of the terrorist attack on September 11, so she went to Europe. Not having much luck there either, she went back to Canada. On arrival, she gave modeling a shot again to pay her way through Art school. She got a deal with Prada soon after that.

When Elmer Olson, the head scout of Elite Modeling Agency left to start his firm, Daria followed. The International Management Group eventually managed Daria Werbowy and her international appeal grew with the agency. She has the most number of shows per season. In 2003, with the help of Stephen Meisel's campaign, she was on the cover of Vogue Italia three times and Prada for their Fall/Winter Campaign. She has been on several international editions of magazine covers like Harper’s Bazaar, Vogue, Marie Claire, Elle, V, W, and Numero.

In 2004, Daria Werbowy was named as one of the Models of the Moment by American Vogue. She was also named Fashion's newest It Girl by W, magazine. She was on the French Vogue editorial. Inez van Lamsweerde and Vinoodh Matadin did the photography, and she was also on the editorial of Vogue which was photographed by Patrick Demarchelier.

In 2005, she was the face of Chanel and Missoni. She also got a contract with David Yurman. The photography was by Peter Lindbergh. Yves Saint Laurent also worked with her in that year with Juergen Teller as a photographer.

In 2006, Daria opened the fall shows for Carolina Herrera and Oscar de la Rentis in New York and Fendi in Milan. She closed the shows for Alexander McQueen and Marni in Milan and Paris. She was also on the cover of Italian GQ magazine. She was listed the ninth highest paid model by Forbes in 2007. She became the face of Rag and Bone's carbon-free T-shirts, Hermes and Valentino.

In 2008, Daria Werbowy was in Canada’s Walk of Fame. She is the second Model ever to have her star on the Walk of Fame, the first being Linda Evangelista. She released a makeup line for Sephora by Lancome. The proceeds go to a charity hospital for underprivileged youths in Brazil.

Daria was named as one of the top 30 models of the 2000s by Vogue Paris. She was in the editorial for Vogue, British Vogue, and W that year. She was also featured on the cover of French Photo topless and was photographed for the issue by Mert Alas and Marcus Piggott.

Daria Werbowy is one of those models who isn’t captivated by themselves. She keeps her own life very private and is hardly ever seen as a scandal to her name. She selects her work very circumspectly, and her exclusivity makes her in even higher demand. She has a stray dog she adopted named Strawballz. Her boyfriend is a carpenter named Tom. They live together in West Cork, Ireland.

When she was young, she learned how to sail on Lake Ontario. In 2008, she spent 24 days sailing with her father, brother, sister and three friends.

Feeling dissatisfied with the modeling industry, Daria Werbowy began to spend time building relationships, reading, meditating and doing Yoga. She also traveled to Peru with her boyfriend, and they helped build a school there. They also went to a remote village in Northern India and spent some time there.

Daria Werbowy is scared of social media as she feels like it takes away from people's experience of what's going on around them but she recently joined Instagram because her family asked her to.