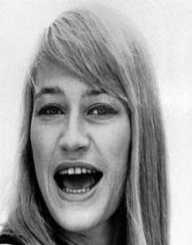 Mary Travers was an American civil rights activist and singer-songwriter of folk-country music. Her trademark long blonde hair and contra-alto voice gave her a niche above others.

Mary Allin Travers was born on November 9, 1936, in Kentucky. She was the daughter of Robert and Virginia Travers. Both parents were journalists and union activists. In 1938, her parents moved to New York. Travers was two years old. Travers joined Little Red School House in Greenwich Village, New York. She did not finish her high school education. Travers dropped out of school in her 11th grade.

Travers' musical journey started in school. She had formed a musical band with her schoolmates. They called it the Song Swappers. Renown folk artists used to have music performances in Washington Square Park. Travers started performing at the park during the Sunday afternoon gatherings.

In 1955, Mary Travers and her friends were invited by Pete Seeger. They did background vocals for his album The Union. Seeger was impressed by their contribution. He invited them for his three other albums.

Travers then quit school to join Broadway Theater. She got a role as a folk singer in the musical production The Next President. Travers knew her music career was on course. Just a few months later, the Broadway musical show closed. She shortly worked as a dental technician. Then she went back to music.

In 1961, Mary Travers was invited to create a music group. Under the guidance of music manager Albert Grossman, she met Paul Stookey and Peter Yarrow. The Three formed the band called Peter, Paul, and Mary. They recorded their debut album in 1962. The self-titled album contained some of Pete Seeger’s songs. These were If I Had a Hammer, and Where Have All The Flowers Gone?

The following year, Travers and the group recorded two albums. The albums were titled Moving, and In The Wind respectively. The trio also did perform at Martin Luther King’s rally in Washington. They then released two songs associated with the civil rights movement. The first was Puff the Magic Dragon. It was followed by Blowin’ in the Wind. The second song was the trio’s rendition of Bob Dylan’s earlier song. The band made numerous tours in America, and Europe.

Travers and her group did record several children songs. The most notable was Peter, Paul, and Mommy. This album was released in 1969.

Mary Travers married four times in her life. Her first marriage was to John Filler. They had a daughter called Erika. After her divorce, she married her second husband in 1963. The photographer husband was called Barry Feinstein. The couple had a daughter called Erika in 1966. In 1967, Travers ended her second marriage. Her third union was to Gerald Taylor. This also ended in divorce. Subsequently, in 1991, she married her last husband. Travers stayed with Ethan Robbins until her death.

Mary Travers was diagnosed with leukemia in 2005. After a bone marrow transplant, she went back on her tours. Travers battled with her terminal illness for four years. On September 16, 2009, Mary Allin Travers died in Connecticut. Her remains were buried at Umpawaug Cemetery in Redding, Connecticut

In her life, Travers did what she loved most, music. Her diversity was wide. She recorded to entertain, and also to educate. This is evident in the performances during the civil rights campaigns she attended. She was also arrested for participating in an anti-apartheid rally. Travers touched many with her stand on equality in life. She was both a folk music entertainer and political activist.