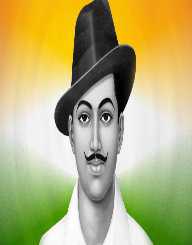 Bhagat Singh was a socialist, revolutionary and political activist who was born on the 28 September 1907 in the village of Banga in the Lyallpur District which is today part of Pakistan. He was the second son of Kishan Singh and Vidya Vati. At the time of his birth, his father was in jail for political activism, and his brother Ajit Singh was also politically active. When the leader of the Ghadr campaign of 1914-1915 was executed, Bhagat Singh was a young and as an admirer of the leader deeply affected him by his execution.

Bhagat Singh was a pupil at the Dayanand Anglo-Vedic School in Lahore. Later after heeding Gandhi’s call to boycott government-aided institutions, he changed to the National College in Lahore.

Because Bhagat Singh was focused on political activity, Singh rejected his father’s plans for him to marry. He moved to Kanpur where he got a job working for the Pratap Press. His political activity continued, and Bhagat Singh joined the Hindustan Socialist Republican Association. After being assured that he would not be forced into an unwanted marriage, he returned home to Lahore. Because of the political climate and Singh’s associations with one of the Gathas, a warrant was issued for his arrest. Bhagat Singh escaped to Delhi and lived under an assumed name while working for Vir Arjun, a newspaper.

When things quietened down, Singh returned home to Lahore. He got involved with the Kirti Kisan Party, becoming a contributor to the magazine, The Kirti. He also continued his association with the Hindustan Socialist Republican Association (HSRA). The Naujawan Bharat Sabha was formed in March 1926 with Singh in the role of secretary.

At a protest march at the arrival of the Simon Commission in Lahore on the 30 October 1928, Lala Lajpat Rai was injured when police charged the marchers. He later died of his wounds.

Singh and associates were outraged, and their response was to plot the association of the Superintendent of Police, James A. Scott. In a case of mistaken identity, the Assistant Superintendent of Police, J.P. Saunders, was shot instead (December 1928). Bhagat Singh was involved in the shooting, and the next day, the HSRA issued a pamphlet saying that they had avenged the death of Lala Lajpat Rai.

Bhagat Singh went to Calcutta where he again assumed another identity and lived in obscurity. When the Public Safety Bill and the Trade Disputes Bill were debated, the HSRA decided to take action by exploding a bomb. Singh along with B.K. Dutt volunteered. The two bombs they flung did not cause much damage. In the mayhem, Singh and Dutt distributed leaflets and shouted revolutionary slogans. They were both arrested and sent to trial. Singh faced an additional charge for the murder of J. P. Saunders.

Bhagat Singh was in Lahore Jail waiting for his trial when he started a hunger strike, and others followed. His trial began on the 10 July 1929. Singh offered no defense instead he used the trial to air his views. He was sentenced to death on the 7 October 1930 and was hung on the 23 March 1931. Singh was twenty-three years of age.

The place where Bhagat Singh and other political activists were cremated is today a Memorial. The original memorial was destroyed in 1971 but was rebuilt.