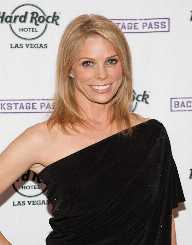 American actress Cheryl Ruth Hines was born on September 21, 1965, to Rosemary (Graham) and James Hines in Miami Beach, Florida, United States of America. She grew up in Tallahassee, Florida and remained associated with the Young Actors

Cheryl Ruth Hines struggled to make a living in her initial days in Los Angeles. She had to do many odd jobs including working as a telephone operator, waitress, television reporter and personal assistant to make ends meet. She was offered a few guest appearances on television shows such as ‘Unsolved Mysteries’ and ‘Swamp Things’.

Her personal favorite was a comedy, and therefore she began attending The Groundlings School in Los Angeles to study comedy writing and improvisation. After having picked up the nuances of improvisational comedy including the technique of writing comedy sketches at the Groundlings, Cheryl got her first big break when she was cast as Cheryl David, the imaginary wife of Larry David on HBO’s comedy series ‘Curb Your Enthusiasm’.

The show used the retroscripting method where individual actors impromptu improvise and make their dialogue with a loose storyline. Hines received an Emmy Award nomination in 2003 and 2006 for Outstanding Supporting Actress in a comedy series for her brilliant portrayal of the character of Cheryl David in the sitcom.

Among these three, her portrayal of the character of Jamie Munro opposite Robin Williams in ‘RV’ stood out. Again in 2007, she starred opposite Keri Russell in the film ‘Waitress’ and created quite a sensation. She was one of the key players in the poker mockumentary comedy ‘The Grand’ in the same year.

Hines then plunged herself into direction and made her directorial debut in ‘Serious Moonlight’ written by her Waitress co-star Adrienne Shelly and starring Meg Ryan. The film received mixed reviews. After starring in the short-lived ABC sitcom ‘In the Motherhood’ in 2009, she guest starred as Kitty Walker McCallister's campaign manager, Buffy in the television series ‘Brothers and Sisters’ during the 2009-2010 season.

Hines enhanced her credibility when she began working as the executive producer for the 2010 reality series ‘School Pride’. The NBC show highlighted the public school renovation work undertaken throughout the United States in their weekly broadcast. She starred on the ABC sitcom ‘Suburgatory’ as Dallas Royce aired between September 28, 2011, to May 14, 2014.

She also appeared in a web series titled ‘We Need Help’ aired on Yahoo Screen. She received the 2516th star on the Hollywood Walk of Fame on January 29, 2014. She began playing the role of Edie, Jason Sudeikis' ex-wife in Fox TV’s animated/live-action hybrid comedy ‘Son of Zorn’ in 2016.

Cheryl Ruth Hines married Paul Young on December 30, 2002. The couple was blessed with a daughter, Catherine Rose Young on March 8, 2004. They filed a divorce suit on July 10, 2010, ending their married life of nearly eight years. She started dating Robert Francis Kennedy, Jr. during late 2011. They got engaged in April 2014 which culminated into their marriage on August 2, 2014.

Hines became actively involved with United Cerebral Palsy; an international non-profit charitable organization dedicated to the cause of providing selfless service to the Cerebral Palsy affected patients after one of her nephews was born with the disease.

Hines eventually served as one of the Board of Trustees of the charitable organization and helped it to collect a fund of $25,000 in an episode of Celebrity Family Feud aired on July 12, 2015, appearing with her immediate full family.