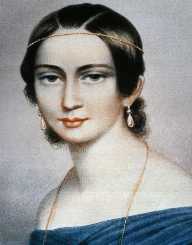 Clara Wieck Schumann was born on September 13, 1819. She was a German musician and composer. She lived in a time where getting female musicians and composers was hard. She was also a pianist. She continued with her career even after her marriage.

Clara Wieck Schumann was born on September 13, 1819, in Leipzig, Germany. She was born into a middle-class family. She was born to Friedrich Wieck who was a piano teacher and Marianne who was a concert pianist. She received training in piano, singing, violin, harmony, theory, and composition when she was still very young. She was inspired by her musically inclined parents. In 1830, she gave her first solo performance at the Leipzig Gewandhaus. Her father took her with him of performing tours. In the 1830s she started composing songs. By 1835, she was famous throughout Europe because of her music.

Clara Wieck Schumann became so popular in Europe as a child prodigy. She travelled a lot and performed before numerous audiences. She received a lot of praise from critics. At the age of eighteen, she performed a series of recitals in Vienna from the year 1837 to 1838. She later fell in love with one of her father’s students. Her father was reluctant as to the relationship but they later got married in 1840. She continued singing and composing music even after her marriage. She started having children immediately after marriage. She gave birth to eight children between 1841 and 1854.

In 1856, Clara Wieck Schumann travelled to England where she was invited to play in a London Philharmonic Society Concert. She was invited to the concert by conductor William Sterndale Bennett. She went back to England many times to perform. In 1857, she and violinist Joseph Joachim went on a recital tour to Dresden, Munich, and Leipzig. Her husband had died at that time and so she continued with her tours and performances. She became famous and thrived as a performing pianist. She became one of the elite musicians from Germany.

In 1867, Clara Wieck Schumann travelled with Joachim and other musicians to Edinburgh and Glasgow in Scotland. In the 1870s she reduced her performance due to bad health but she continued travelling until the late 1880s. In 1878, she became a teacher of the piano at the Hoch Conservatory, Frankfurt, a post she held up to 1892. In 1891, she played her last public concert in Frankfurt.

In 1840, Clara Wieck Schumann got married to Robert Schumann with whom she had eight children in quick succession. In 1856, her husband died of syphilis as he had developed severe mental issues. She suffered a stroke in March 1896. She later died on May 20, 1896. She died at the age of seventy six.  She was a strong woman as she jangled taking care of her family and pursuing her career. She had eight children but four of her children predeceased her.