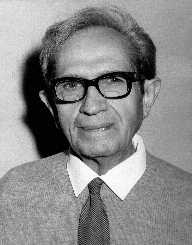 Sir Bernard Katz was born on March 26, 1911. He was a biophysicist. He is known for his work on biochemistry. In 1970, he received the Nobel Prize in Physiology or Medicine.

Sir Bernard Katz was born on March 26, 1911, in Leipzig in Germany. He was born to Max Katz who was a Jewish Merchant and Eugenie. He was born as an only child. In 1917, his family became stateless when the Bolsheviks took control of Russia. In 1920, he was declined admission into Schiller Real Gymnasium because of his religion. He was a Jew. In 1921, he joined Konig Albert Gymnasium where he studied Latin and Greek.

Sir Bernard Katz also studied mathematics. In 1929, he joined the University of Leipzig where he studied medicine. In 1933, he earned the Siegfried Garten Prize after the research he conducted under Martin Gildemeister. In 1934, he obtained his degree. In 1935, he moved to England where he joined the Laboratory of Archibald Vivian Hill at the University College of London. He joined the College as a Ph.D. Student. In 1938, he completed his doctoral work. In 1942, he received his Ph.D.

In 1939, Sir Bernard Katz received the Carnegie Fellowship and joined the Laboratory of Australian neurophysiologist, Carew John Eccles. The Laboratory was situated at the Kanematsu Institute of Sydney Medical School. In 1941, he became a naturalized British Citizen with a valid passport. In 1942, he became a radar officer in the Royal Australian Air Force in New Guinea.

In 1946, Sir Bernard Katz returned to England where he became an Assistant Director of Research in Biophysics and Henry Head Research Fellow at the University College of London. In 1950, he became the Reader in Physiology at the College. In 1952, he was appointed the Professor of Biophysics, a post he held up to 1978. He researched nerves and muscles. He is known for his quantal hypothesis which assisted in explaining the fundamental physiological mechanism of transmitter release.

In 1945, Sir Bernard Katz married Marguerite Penly with whom he had two children, David and Jonathan. He died on April 20, 2003, in London. He died at the age of ninety two.