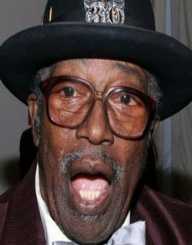 Bo Diddley was an American R&B singer, songwriter, and guitarist. He is best known as a pioneer for transitioning blue to rock.

Bo Diddle was born on December 30, 1928, in McComb, Mississippi. His name at birth was Ellas Bates. His family moved him to the South Side of Chicago to live with his cousin Gussie McDaniel.  She later adopted him. There Bo Diddle learned how to play the trombone and violin with the help of his church's music director.

Bo Diddle attended Foster Vocational High School in Chicago. He was learning how to make violins and guitars. He eventually dropped out of school.

Bo Diddle worked various jobs as a carpenter and a mechanic. When he wasn't working, he was playing his music in the streets or any bar gig he could get in Chicago. His first recording contract was with Checker, a subsidiary of Chess Records, in 1995.

Diddley continued gaining in popularity bringing his upbeat music on tour or television through the 1960s. However, during the 1970s, his popularity waned as music was changing.

Still, he continued playing and touring with bands including The Grateful Dead and The Clash. His music is credited in over 150 films, documentaries, and TV shows. His final studio album was titled Man Amongst Men which was released in 1996.

Bo Diddley's best known for his impact on American music. His songs influenced future generations of musicians including Elvis Presley, Buddy Holly, The Doors, the Rolling Stones, and Bruce Springsteen. Even the rhythm of his music is heard in more contemporary songs such as “I Want Candy,” “Desire” by U2, and “Faith” by George Michael.

They had two children and stayed married until 1980 when they divorced. In 1992, Diddley married Sylvia Paiz. The couple divorced in 2005. Bo Diddley died on June 2, 2008, at the age of 79 in Archer, Florida. The cause of death was reported as heart failure.

The Recording Academy at the Grammy Awards, Lifetime Achievement Award, 1998