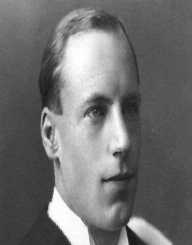 Eric Liddell was a Scottish athlete and Christian missionary in China.

Eric Henry Liddell was born in the city of Tientsin, China, on January 16, 1902. His parents were Scottish missionaries, part of the London Missionary Society. He went to school in China until he was five years old. When he was six years old, his parents enrolled him and his brother at Eltham College, a Christian boarding school in London. They moved to England, while their parents and sister remained in China. In 1920, he started studying pure science at the University of Edinburgh. In 1924, he graduated with a Bachelor of Science.

Liddell first started to take part in sports while he was studying at Eltham College. He became the captain of the cricket and the rugby teams. He won the Blackheath Cup for best athlete in his year. He kept playing rugby at the University of Edinburgh. He was in the backline of the Scotland National Rugby Union Team. He also took part in short distance races. In 1923, he won the Athletic Championships in the categories of 100 yards and 220 yards. He set a new British record in the 100-yard race. He became well known in Scotland as the fastest man in the country. Many newspaper articles predicted he would become an Olympic champion.

Eric Liddell returned to China in 1925. Although he liked sports, his real passion was missionary work. He still participated in a few smaller competitions. He won the first place at the South Manchurian Railway celebrations and the 1930 North China Championship.

Liddell’s first missionary job was teaching at an Anglo-Chinese College. Most of the students came from wealthy Chinese families, so the goal was for them to grow up and become influential figures who would promote Christianity. He trained them in different sports. Apart from that, he served helped at the Sunday School in the church where his father worked as a pastor. He also assisted in the building of the Minyuan Stadium, suggesting for it to be designed just like the football ground of Chelsea.

Life in China soon became very dangerous because of the aggressions of the Japanese army. Liddell stayed, trying to help in different camps for the poor. In 1943, he was one of the many trapped in the Weihsien Internment Camp by the Japanese Army. Even there, he still tried to help others. He organized the food, the medicine, and the other supplies. He also tried to educate and entertain the people, especially the kids. He told them stories, he played chess with them, and he organized sports games.

In 1934, Eric Liddell married Florence Mackenzie, a Christian missionary from Canada. They had daughters Patricia and Heather. When the situation in China worsened in 1941, she left to join her family in Canada together with their daughters. There, she gave birth to their third daughter, Maureen that he never got to meet.

Liddell died on February 21, 1945, just five months before the others were liberated from the camp. He had a brain tumor, and he was also malnourished and overworked. He was buried in the garden, behind the quarters of the Japanese officers.

In 1980, the Eric Liddell Centre was set up in Edinburgh. In 1981, the British drama Chariots of Fire was released. It revolved around Liddell and another sprinter called Harold Abrahams. The film won an Academy Award. In 1991, the University of Edinburgh made a memorial headstone. In 2012, the same university launched a sports scholarship in his name.