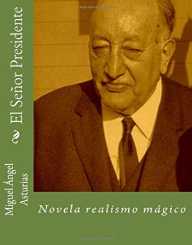 Miguel Ángel Asturias Rosales was born on October 19, 1899, in Guatemala City. He was the first child of lawyer and judge, Ernesto Asturias Girón and school teacher, María Rosales de Asturias. He had a younger brother, Marco Antonio. Having their roots in the Spanish ancestry, his parents belonged to a considerably dignified and noble heritage. His father's family immigrated to Guatemala in the 1660s.

When Miguel Asturias was six years old, his father lost his job due to his opposition to the dictatorial rule of Manuel Estrada Cabrera and his subsequent confrontation with the dictator in judicial matters. Consequently, they had to leave Guatemala City and went to the house of Asturias’ grandparents in Salama town, the departmental capital of Baja Verapaz, Guatemala.

While living at his grandparents’ farm, Miguel Asturias got a chance to mingle with the indigenous people of Guatemala including his Nanny Lola Reyes, who was a young native woman. He listened and learnt stories about indigenous people and the myths and legends surrounding them. His literary work was greatly influenced by this early knowledge of the ancient Mayan culture.

Miguel Asturias returned to a suburb of Guatemala City in 1908 after spending three years at his grandparents’ house. He attended a few local colleges and during this time he was drawn towards writing. He began to write the draft of a story while attending college. Later, the story was made into his famous novel ‘El Señor Presidente.’ In 1922, Asturias along with other like-minded students established a community project and named it ‘Popular University.’

Middle-class people were encouraged to conduct free classes for the benefit of the underprivileged under the aegis of this University. Miguel Asturias started studying medicine for a year. He switched over to the study of law and enrolled himself at the Universidad de San Carlos de Guatemala in the Guatemala City. In 1923, he secured his law degree and also received the Galvez Prize for his thesis regarding the problems of indigenous people.

Miguel Asturias traveled to London for pursuing a course in Political Economy immediately after his graduation. After a few months, he moved to Paris to study ethnology at the Sorbonne (University of Paris). French poet and literary theorist André Breton was, at that time, leading the surrealism culture of France. Under his influence, Asturias became a dedicated surrealist. At the same time, he started writing his poems and fictional stories.

During his college days in Guatemala City, Miguel Asturias founded the Association of University Students and the Association of Law Students besides actively participating in ‘Platform of the Unionist Party.’ The dictatorship of Manuel Estrada Cabrera finally came to an end due to the active movement initiated and organized by this party. Asturias was an active participant in the uprising responsible for overthrowing the dictatorship of Manuel Estrada Cabrera.

In 1925, Miguel Asturias started translating the Mayan sacred text, the ‘Popol Vuh,’ into the Spanish language. He ventured into journalism when he founded a magazine during his ten-year stay in Paris. It was called ‘Tiempos Nuevos’ (New Times) in French. His first novel ‘Leyendas de Guatemala’ was published in 1930. He later translated it into French and was awarded the Sylla Monsegur prize for the translation. On July 14, 1933, he again went back to Guatemala. Initially, Asturias worked as a journalist for a living after returning to Guatemala. Later, he went on to serve as a Diplomat representing Guatemala. During his journalism days, he wrote several poems and published some of them in 1936 in a book named ‘Sonetos.’

Miguel Asturias was elected to the Congress in 1942, and in 1946 he started his diplomatic career. He was posted in Buenos Aires, Argentina in 1947 and Paris, France in 1952 as the ambassador of Guatemala. In 1946, the dictatorial government of Jorge Ubico was overthrown, and a liberal government came in its place. His epic novel ‘El Señor Presidente,’ which he could not publish all these years due to the fear of the authoritarian rulers of the country, was published forthwith. In 1949, he published ‘Sien de Alondra,’ an anthology of poems. He also published a novel named ‘Men of Maize’ in the same year.

The popular liberal government of Jacobo Arbenz was overthrown by the rebels led by Carlos Castillo Armas in 1954. Simultaneously, Miguel Asturias also expelled from the country and stripped off his Guatemalan citizenship as he supported the regime of Arbenz. Asturias spent the next eight years of his life in exile staying mostly in places like Buenos Aires, Chile, and Genoa.

In 1963, Miguel Asturias authored the book ‘Mulata de Tai’ while living in Genoa and saw his reputation grow as an acclaimed writer. In 1966, democratically elected revolutionary leader Julio César Méndez Montenegro was sworn in as the new President of Guatemala. Asturias’ Guatemalan citizenship was restored, and exile was withdrawn. He was appointed Ambassador to France. He served at the office till 1970 and after that took permanent residence in Paris.

From 1950 to 1960, Miguel Asturias authored three novels depicting the lives of mainly the indigenous banana plantation farmers of Central and South America. The three novels were titled ‘The Cyclone,’ ‘The Green Pope’ and ‘The Eyes of the Interred’ and is famously referred to as ‘Banana Trilogy.’ In 1967, he published the English translation of ‘Mulata de Tai.’ A compilation of his work titled ‘Obras completas’ was published in the same year.

Miguel Asturias was conferred with the Lenin Peace Prize in 1966 for his ‘The Banana Trilogy.’

He was awarded the Nobel Prize in Literature in 1967 for his novel ‘Hombres de maíz’ (Men of Maize).

In 1939, Miguel Asturias married his first wife, Clemencia Amado. They were blessed with two sons Miguel and Rodrigo. The marriage ended in divorce in 1947. He married his second wife, Argentinian Blanca Mora y Araujo in 1950. In 1954, when Asturias was deported from Guatemala, he stayed most of his exile period at his wife’s place, Argentinian capital Buenos Aires.

He died on June 9, 1974. He was the second Latin-American author behind Gabriela Mistral to have received the Nobel Prize in literature. Guatemalan government initiated an award titled ‘Miguel Ángel Asturias National Prize in Literature’ in recognition of his immense contribution towards literature.