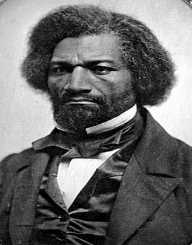 Frederick Douglas was an American human rights advocate, abolitionist, orator, and writer. Born on February 20, 1818, became the first African-American to hold a high-rank position in the U.S. government. He served as a U.S. minister and consul general to Haiti. Douglas was one of the main human rights figures in the 19th century. Born into slavery, Douglas managed an escape from his undignified situation. Following the successful escape, he became an abolitionist movement leader in New York and Massachusetts. Douglas is noted for his extensive anti-slavery writings and his oratorical skills. His writings include the autobiographies Narrative of the Life of Frederick Douglas, an American Slave (1845), and My Bondage and My Freedom in 1855.

Frederick Douglas was born Frederick Augustus Washington Bailey on February 20, 1895, at the Chesapeake Bay, in Maryland. His exact month and day of birth are unknown, but he later adopted February 14. Douglas's mother Harriet Bailey was a black slave and his father a white who he never met. Separated from his mother at infancy, he lived with his maternal grandmother, Betty Bailey. His mother died when he was ten years.

He later moved to serve under Aaron Anthony at the Wye House plantation. Following Anthony’s death, Douglas moved to Baltimore, as a house servant of the Hugh Auld family. Luckily, Hugh’s wife, Sophia, began teaching him how to read and write. However, Hugh managed to convince his wife that education was not good for slaves. According to him, when slaves receive education, their desire for freedom would increase. As a result, Sophia stopped the tutelage. Douglas, therefore, had to seek help from other white students. He also secretly taught himself how to read and write. He read from newspapers, and political materials among others to broaden his horizon.

Douglas moved from one slave master to the other. In 1833, he attempted his first escape alongside three other slaves but the plan foiled. In 1836, while working with slave master Edward Covey, he tried another escape, however, failed again. Despite previous failures, he tried the third time and succeeded. Douglas escaped slavery on September 3, 1838, aboard a train. Within less than 24 hours, he was in New York City, an anti-slavery state. Following the successful escape, he adopted the name, Douglas. He had previously used the names Stanley, and Johnson.

Career as abolitionist and preacher

After about a year of escape, Douglas earned a license as a preacher in 1839. His career as a preacher further developed his oratorical ability. He attended abolitionist meetings and joined other related organizations. He also engaged in several protests against segregation.

Douglas described his experiences as a slave during an anti-slavery convention at Nantucket, Massachusetts in 1841.

After that eloquent delivery, Douglas earned a career as an agent for the Massachusetts Anti-Slavery Society. This even strengthened his resolute to devote himself to the abolitionist cause. He faced several challenges including violent attacks, insults, and mockery during the process.

In 1845, Douglas published the autobiography A Narrative of the Life of Frederick Douglass, an American Slave. Subsequently, he released another autobiography, Life and Times of Frederick Douglas, in 1882. The former extensively covered Douglas as a slave including details of his former slave master. This exposed him to great danger and an imminent capture by his formal master. To avoid such incident, Douglas journeyed Great Britain and Ireland in 1845. In Europe, he made several friends including fellow abolitionists.

Following his return to the US two years later, he purchased his freedom from his master. Subsequently, he started an antislavery newspaper, the North (later Frederick Douglass’s Paper) in Rochester, New York. The paper ran from 1847 to 1860.

From 1861 to 1865 during the Civil War, Douglas worked as a consultant to President Abraham Lincoln. During this period, Douglas advocated that all former slaves be armed to fight for the North. He wanted the war to be a form of direct attack against slavery.

After the war, he continued advocating in the field of civil rights. In addition, he supported the women’s rights movement.

Douglas later became an assistant secretary of the Santo Domingo Commission in 1871. From 1877 to 1881, he served as a marshal at the District of Columbia. Following that, he became recorder of deeds from 1881 to 1886. Douglas earned an appointment as US minister and consul general to Haiti from 1889 to 1891. This made him the first black American to serve in that higher capacity.