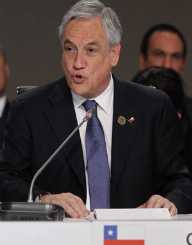 Sebastian Pinera was born on December 1, 1949, in Santiago, Chile. His mother is Magdalena Echenique Rozas. His father, Jose Pinera Carvallo, was the ambassador to the United Nations, so Sebastian spent much of his childhood living in the United States. He also has several siblings: Guadalupe, Hose, Magdalena, Miguel, and Pablo.

As a young adult, Sebastian Pinera attended the Pontifical Catholic University of Chile. There, he earned a bachelor’s degree in administration and business in 1967. After graduating from this college, he went on to study at Harvard University, in the United States. There, he earned both his master and doctorate degrees (both in economics). While studying at the school, he worked as an assistant teacher to pay for his education. He finished his education in 1971.

Sebastian Pinera broke out into the world of politics in 1974. He already had some experience with it, as his father worked in the same field when he was growing up. Instead of working as an ambassador, he took a job working as a consultant for both the World Bank and the Inter-American Development Bank.

In 1976, while working at both several universities and the banks, he took on another job, working with the group, the United Nations Economic Commission for Latin America and the Caribbean. This group worked on lowering poverty in Chile and nearby countries. In 1978, Pinera stopped working for the banks.

In 1979, Sebastian Pinera went into business for himself. He created what he called the Bancard, which was his type of credit card. He released this card to the people of Chile. This business made him insanely wealthy. He is currently worth over a billion dollars.

Also in the late 1970’s through the 1980’s, he was one of the founding members of the Las Americas Real Estate Company. Around the same time, he also helped to found the Aconcagua Construction Company, which could prove to be useful in his real estate company, as well as just general other businesses. Sebastian Pinera later created an unrelated company, the Los Andes Publishing House.

In the 1990’s, Sebastian Pinera worked on getting back into politics. He was elected into Chile’s senate in 1990. He held this seat until 1998. It was not until 2009 that he began to run for president of Chile. He was a member of the Coalition for Change political party. This group was made up of what used to be several other smaller political parties which held similar goals and ideals. This party was new at the time, but that didn’t seem to better for Pinera and those who supported him. Sebastian Pinera’s main opponent in the election was Eduardo Frei. Sebastian Pinera proved to be better than Frei, and so he was elected as the president of Chile in 2010. He served as president of Chile for one term, until 2014. He was succeeded by Michelle Bachelet.

Sebastian Pinera (along with his wife) has two charities. His first charity, created in 1989, is called the Fundación Mujer Emprende. This charity aims to help poor women. Another charity of his, created in 1993, is called Fundacion Cultura y Sociedad (but was previously known as Fundacion Futuro). This charity aims to help all of Chile retain its culture and heritage, while still looking on ways to advance for the future.

Outside of his own charities, Sebastian Pinera also generously donates to various other charities, most of them focusing on the welfare of the people of Chile.

Sebastian Pinera was involved with the tragic case of the trapped Chilean miners in 2010. He was a part of the effort to rescue them. He was later awarded the Link Americas Foundation Life Award for his part in the rescue. A film was later made about this event called The 33.

In 2012, he won the Latin Trad Leader of the Year Award.
In 2014, he won the World Affairs Council of Philadelphia’s International Statesman Award.