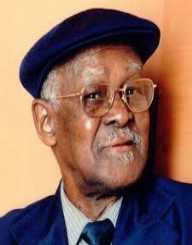 Cuban singer Ibrahim Ferrer was famously born at a dance on February 20, 1927. He was born in San Luis, near the city of Santiago de Cuba, Cuba. Both his parents were associated with music. His father was a musician who played guitar and sang.

Ibrahim Ferrer also was Bohemian by nature. His mother, a performing artist, gave him a Muslim name out of her fascination for Arabia. She died when Ferrer was 12-years-old. The death virtually made him an orphan.

Consequently, he had to abandon his studies and had to sing on the streets to support himself. He was even required to sell fruits and vegetables to passersby to make ends meet. One year after his mother’s death, he formed a band with his cousin Jose Coba. They named the band ‘Jovenes del Son’ which in English means ‘Youths of Rhythm’. Soon they started getting enough work to make a decent living.

While singing for his band, Ferrer became well-acquainted with the sounds and musical legacy of Cuba and different Cuban styles, such as danzón, boleros, and guarachas. In the process, he also became well-versed with the blends of African and Spanish rhythms and melodies.

As Ferrer became experienced enough in the local music circle, he began playing with the more established music groups. He performed with some of the popular groups such as Beny Moré, Conjunto Sorpresa, Maravilla de Beltrán, and La Orquesta Chepín Chovén. The latter group provided him his first recording opportunity. He recorded his biggest hit "El Platanal de Bartolo'' in 1956 as a lead singer of the group ‘La Orquesta Chepín Chovén’.

The popularity of this record and the accompanying fame and wealth made it possible for Ferrer to move to Havana, the capital city of Cuba. In Havana, he met his old music mate from Santiago, Pacho Alonso. Pacho Alonso was already a leading name in the Cuban music circle at that time, being known as the innovator of the music style known as Pilón. In 1953, Ferrer became a member of the Pacho Alonso’s band ‘Los Bocucos’ and remained associated with the group as one of their lead singers for the next 20 years.

Slowing Down  Of The Music Business

After the 1959 revolution, Cuba was governed by the communist regime under the helm of Fidel Castro. As an immediate fallout of the change of guard, the fertile music scenario of Cuba declined to a considerable extent.

The footfall of the affluent tourists in the nightclubs, hotels, and casinos took a beating. Ferrer found it difficult to support him by singing alone. As a result, he had to work in the dock as a construction worker like many others of his profession for the time being.

During the early 1960s, Ibrahim Ferrer along with the band Los Bocucos toured Europe, including Paris, Prague, and Moscow. The group found themselves stranded in Moscow at the height of the Cuban Missile Crisis. Russian President Nikita Kruschev, while acting as a cordial host to the members of the group, asked Ferrer, at one point in time, his view about the missile crisis.

Ferrer was completely unaware of the recent happenings being on the road for the last two months. As a major fallout of the incident, Ferrer decided to play more for his people rather than touring other countries.

Retirement And The Subsequent Return To Glory

Ibrahim Ferrer retired from singing altogether by 1991. He used to receive a small state pension and supplemented this income by selling lottery tickets and shining shoes. In an unusual turn of events, music director Juan de Marcos González tracked down Ferrer on the streets of Havana. He persuaded Ferrer to come on board to join a galaxy of Afro-Cuban All-Stars to sing along to a bolero. The rest is history.

‘A Toda Cuba le Gusta’, the first album recorded with his performance with the Afro-Cuban All-Stars, was nominated for a Grammy award. His exceptional talent as a Bolero singer finally gained recognition by the album called ‘Buena Vista Social Club’ which followed the ‘A Toda’ album. The album received a Grammy Award. It also revived Ferrer’s career to a new height.

He further went on to record another few albums including his first solo attempt in 1999. Ferrer also received a Latin Grammy for Best New Artist in 2000 and another Grammy in 2004. He could not receive the last of his Grammy due to the U.S. government's denial to permit him to enter America.

Ibrahim Ferrer had a large family with 11 children. He died on August 6, 2005, at CIMEQ Hospital in Havana, Cuba, due to multiple organ failure. He was 78 at the time of his death and had just returned from a European Tour.