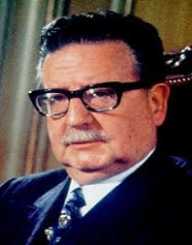 Salvador Allende was a Chile physician and a politician. He became the first socialist to ascend to the presidency. He, however, took his life in 1973 during a military coup.

His grandfather was a renowned social reformist in and a prominent physician. Also, he founded one of the first secular learning institutions in Chile.

At a young age, Salvador Allende's role model Juan De Marchi inspired him into joining politics. As a student leader in the university, he played radical politics and often arrested several times while protesting against the government of the day.

After high school, he enrolled at the University of Chile. He later graduated with a medical degree in 1933. Professor Max Westenhofer, a German pathologist, had the most significant influence on his university life.

Salvador Allende married Hortensia Bussi in 1990. The couple went on to have three daughters Beatriz, Carmen Paz, and Isabel.

One of his three daughters Isabel Allende went on to follow his father's footsteps in politics. Several other known members of Allende's family include grandchildren Jurado Allende and Fernandez Allende.

Salvador Allende led a group of young politicians to form the Socialist Party of Chile in 1933. After that, he became the first chairman of the new party.

He successfully spearheaded campaigns for Pedro Aguirre Cerda who was a presidential hopeful. After winning the election, he became the Minister for Health.

Some of the radical changes he initiated in the ministry included maternal care, free lunch program for school children, safety laws for workers and pension for the widows.

Between 1945 and 1969, Salvador Allende served as the senator for Valdivia, winning the seat four consecutive times. As a senator, his commitment to ensuring social justice in Chile earned him admiration from various quarters.

In 1952, Salvador Allende made his first attempt to Chile's top seat. He later made the second and third attempt in 1958 and 1964.

His successful attempt came in 1970; during this time, the country was in a deep economic crisis. Its major challenges included the high unemployment rate, also, almost half of the children below the age of 15 suffered from malnutrition.

His action of nationalizing large-scale industries and taking over American owned enterprises led to the diplomacy war with the United States government.

Salvador Allende's action against the US citizens led to Richard Nixon's government to support the opposition to oust him from the top seat. His failure to control his wing of politicians deepened the country's economic situation.

He still, however, had support from the workers and peasants. His popularity among the middle class had deteriorated.

An attempt by the military led by Augusto Pinochet to overthrow Salvador Allende's government hit the wall. He refused to surrender the presidency voluntarily, instead surrounding himself with troops in the presidential palace.

Many civilians died and others wounded during the battle. After an Air force attack, his lifeless body was found in the palace.

Several conflicting reports have been tabled on the cause of his death. Some believe the soldiers killed him. An autopsy report, however, indicated that he committed suicide.