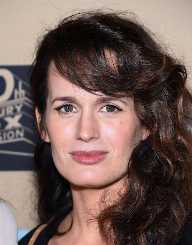 Elizabeth Reaser was born on 2 July 1975, in Bloomfield, Michigan, USA. Her parents are Karen Davidson and John Reaser.

Elizabeth Reaser attended the Academy of the Sacred Heart school for her high school studies.

For her postsecondary education, she first attended Oakland University. She later went on to study acting at Juilliard School. She later graduated from this college in 1999.

Beginning in 1999, Elizabeth Reaser began performing in plays. Her first major play she was in was called Sweet Bird of Youth. She spent much of her time working on stage shows in the early part of the 2000’s. Some of the plays she was in during this time were Blackbird, Close, and The Winter’s Tale. During this time, she worked with several major theatres including the Bush Theatre, American Repertory Theater, and the Williamstown Theatre Festival.

After 2005, Elizabeth Reaser took a break from acting on the stage to pursue taking on more roles for television and movies. However, she later returned to the stage in 2012 when she acted in How I Learned to Drive. Since then, she had also had parts in the plays Conviction, The Money Shot, and Permission.

Elizabeth Reaser made her television acting debut on the comedy show Scrubs. On this show, she played the character, Molly. However, the role was small, and she was not officially credited for this role. She then went on to play another small role in the Sopranos.

In 2001, she had her first small role in a movie called The Believer. For the next few years of the early 2000’s, she continued to take on small parts in movies like Emmett’s Mark, and Mind the Gap. It wasn’t until 2005 that she had her first large role in a movie called Stay. After this, she continued to have larger roles in movies, like in The Family Stone and The Wedding Weekend.

In 2006, Elizabeth Reaser went back to focusing on acting in television shows. She worked on Saved, a medical drama, where she played Dr. Alice Alden for one season. She then had a guest role on the show Standoff in the same year. She later went on to work on another medical drama, Grey’s Anatomy. She worked on this show for 18 episodes.

While working on the Twilight movies, and once the movies were done, she continued to work on television series and movies. Some of the other shows and movies she has acted in since 2008 are listed below.

Against the Current
The Ex List
The Art of Getting By
Young Adult
Liberal Arts
The Good Wife
Ouija: Origin of Evil

Throughout her acting career, Elizabeth Reaser has won and been nominated for several awards. Some of her winning awards are listed below.