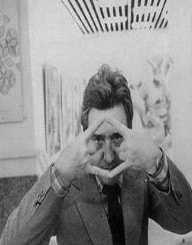 Roberto Matta was born on November 11, 1911, in Santiago, Chile. He was of Spanish, Basque and French descent. Matta studied and the Pontificia Universidad Catolica de Chile in Santiago. He studied architecture and interior design and graduated the university in 1935. Before graduating, Matta traveled to Peru and Panama. During this time, he made several surreal drawings of the geography he witnessed.

After graduating from University, Matta served as Merchant Marine. This led him to Europe and later he also traveled to the United States. During his travels, Matta met several artists such as Arshile Gorky, Rene Magritte, Andre Breton and Salvador Dali, which had a big influence on his work.

Andre Bretton had a major influence on Mattas early work. He provided the young artist with a direction in art and encouraging him to pursue with surrealism. He also introduced Matta to several members of Paris Surrealist movement. Matta began his career by publishing illustrations and articles for Surrealist journals in Paris. During this time, he also became acquainted with prominent contemporary European artists, such as Marcel Duchamp and Pablo Picasso.

Roberto Matta made his name in the art industry in 1938, when he switched from drawing to oil painting that he was later widely known for. During this time, Matta emigrated to the United States, where he lived until 1948. One of his best-known early works is the Invasion of the Night. During this time he also produced his “inscape” series, representing the human psyche in visual form. During the 1940s and 1950s, Mattas work was filled with images of electrical machinery and distressed figures, which was a reflection on the disturbing state of world politics. In the 1960s, Matta added clay to his paintings, which created more dimension to the distortions.

During the 1950s and 1960s, Roberto Matta lived between Europe and South America. During this time, he became separated with the surrealist movement. This followed after Matta was accused of indirectly causing the suicide of Armenian-American painter Arshile Gorky. Matta had had a relationship with Gorky’s wife, which might have played a part in the artist’s fatal decision. However, by this time Matta had made his name and moving away from the surrealist movement group did not cause his career to decline.

Roberto Matta became involved in social movements during the 1960s and 1970s. He believed that art and poetry could have a major impact on peoples lives. In Chile, Matta was a strong supporter of the socialist government with its president Salvador Allende. After Salvador Allende was overthrown in 1973, the military regime of Augusto Pinochet painted over Matta’s The First Goal of the Chilean People mural. The mural was discovered in 2005 and completely restored by 2008.

Besides painting, Matta also worked with several different types of media. One of his best-known materials to use was clay. Matta worked with ceramics, photography and also tried his talents in video production.

Matta’s first wife was Patricia Echaurren, who, after divorcing Roberto Matta married Pierre Matisse. His second wife was Germana Ferrari. Matta was a father to six children, but two of them died at a young age. The Chilean artist died in Civitavecchia, Italy in 2002.