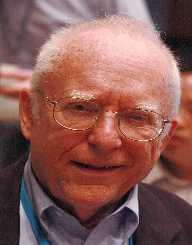 John Douglas Cockcroft was born on the 27 May 1897 in Todmorden, England. His family was cotton manufacturers.

John Cockcroft was a pupil at Todmorden Secondary School before doing his tertiary education at Manchester University. He studied mathematics under Horace Lamb in 1914-1915. After being enlisted in World War I, he returned to Manchester University and studied electrical engineering. Cockcroft then did a two-year apprenticeship with the Metropolitan Vickers Electrical Company before studying at St John’s College, Cambridge University where he took the Mathematical Tripos in 1924.

After qualifying, John Cockcroft had the opportunity to work under Lord Rutherford at the Cavendish Laboratory. He worked with Pyotr Kapitsa researching ways of creating ultrastrong magnetic fields and in 1928 began working on using high voltages to accelerate protons. Together with Ernest Walton, Cockcroft helped developed the Cockcroft-Walton Machine. The machine was used to stimulate particles to bombard light atoms, causing disintegration. By 1932 they identified the products of the decay as helium nuclei and in 1933, produced radioactivity and transmutations. (This research won Cockcroft and Walton the joint Nobel Prize for physics in 1951).

In 1939 Cockcroft was named the Jacksonian Professor of Natural Philosophy at Cambridge University.

At the outbreak of World War II, the Ministry of Supply appointed John Cockcroft Assistant Director of Scientific Research. Work he did involve dealing with problems relating to radar and defense systems. In 1940 he was part of the Tizard Mission in the United States. The Tizard Mission was formed to share classified radar information with the Americans. Cockcroft was appointed the head of the Canadian Atomic Energy project in 1944. He was also a director of Chalk River Laboratories.

John Cockcroft returned to the UK in 1946 and took up the post of the first Director of the Atomic Energy Research Establishment in Harwell.

During the 1950s Cockcroft was a member of the U.K. Atomic Energy Authority. From 1959 he was the inaugural master at Churchill College College, Cambridge, a position he held until 1967. He was Chancellor of the Australian National University in the Australian capital Canberra between 1961 and 1965. Cockcroft was president of the Institute of Physics, the Physical Society from 1960 until 1962. And from 1961 until 1963, president of the British Association for the Advancement of Science.

When the nuclear plant in Windscale, Cumbria was being designed and constructed, John Cockcroft insisted on the fitting of high-efficiency filters in the flue-stacks of the plant. The screens, which were an addition to the original design, were believed to be an unnecessary cost. They became known as Cockcroft’s Folly. Then in 1957 when there was a significant incident at the plant, the filters played an essential role in reducing the damage which occurred.

John Cockcroft married Eunice Crabtree in 1925, and they had five children together.

In 1938 Cockcroft was awarded the Hughes Medal. He was knighted in 1948. Then in 1951 he shared the Nobel Prize in Physics with Ernest Walton for their research and worked into the splitting of atoms. Cockcroft subsequently won the Royal Medal (1954) and the Faraday Medal (1955). He also received numerous university doctorates.