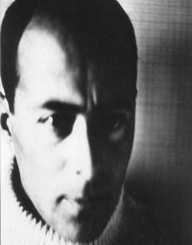 El Lissitzky was a Russian artist, designer, architect, and photographer, who was part of the avant-garde movement.

Lazar Markovich Lissitzky was born in the town of Pochinok, Russia, on November 23, 1890. His family was Jewish. He studied in schools in Vitebsk and Smolensk. At the age of 13, he started taking art lessons from the painter Yehuda Pen. In 1909, he tried to enter an art academy in Saint Petersburg. He was rejected because the laws allowed only a small number of Jewish students to enter schools.

He left for Germany, and he started studying architectural engineering at the Technical University in Darmstadt. He spent some time visiting France and Italy and admiring their art and architecture. When World War I started, he had to come back to Russia. He spent a year studying at the Polytechnic Institute of Riga which had been moved to Moscow.

After graduation, El Lissitzky worked for the firms of the architects Roman Klein and Boris Velikovsky. He started to focus on Jewish art which flourished after the fall of the antisemitic Tsarist regime. He illustrated a few Yiddish children’s books. In 1917, he published the book An Everyday Conversation, where he decorated Hebrew letters in a modern artistic style. After that, he published a book which told the Passover song One Goat through drawings.

In 1919, Lissitzky started teaching architecture and graphic arts at the People’s Art School in Vitebsk. He was also hired to make propaganda posters, mostly depicting the politician Leon Trotsky. He soon met the artist Kazimir Malevich, and he became very influenced by his style. He abandoned figurative art, and he instead chose suprematism.

El Lissitzky's most famous work at that time was the poster called “Beat the Whites with the Red Wedge.” It depicted the fight between the communists and the conservatives. In 1920, he and Malevich formed a group of artists called UNOVIS. They worked on creating a ballet promoting their ideas, and they remade the opera Victory Over the Sun. They disbanded in 1922.

During this time, Lissitzky created some paintings of his own which he called Proun. They were abstract and geometric, and they served as a foundation for his future architectural work. They sometimes contained Jewish symbols.

In 1921, El Lissitzky moved to Berlin. He got a job as a cultural representative of Russia, with the goal of connecting Russian and German artists. There, he started spending time with many artists such as Kurt Schwitters and Theo van Doesburg. He kept illustrating children’s books, and he also developed his career in graphic design. In 1924 he moved to Switzerland. He designed advertisements, and he experimented with typography and graphic design. The next year, he moved back to Moscow, and he started teaching interior design and architecture.

In 1926, El Lissitzky started designing exhibition rooms. He began with two art rooms in Dresden and Hanover. He continued back in his country, by designing displays for Soviet pavilions. He also kept working with print media, designing posters. He even started experimenting with photomontage, making innovations in the field. In 1932, Ogonyok magazine commissioned him to design a building that would serve as a print shop. He created it with the idea of making a horizontal skyscraper. The building was his only architectural work.

In the 1930s, Stalin started to close down artists’ unions. Everyone had to conform to the country’s desired style. Lissitzky’s career was still going strong. He worked as one of the lead decorators on the All-Union Agricultural Exhibition, the Central Pavilion, and the Soviet pavilion for the 1939 New York World’s Fair.

In 1927, El Lissitzky married the German art historian and collector Sophie Kuppers. In 1930, they had a son named Jen. He announced his birth by creating a photomontage that also paid importance to the country.

El Lissitzky suffered a long battle with tuberculosis. He passed away on December 30, 1941, in Moscow.  Before he died, he started writing his autobiography. His wife finished it and published it in 1967, calling it El Lissitzky: Life, Letters, Texts.