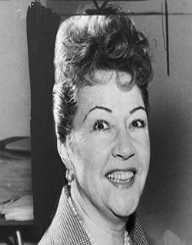 In a third-floor bedroom of her grandmother’s house in Astoria Queens New York on January 16, 1908, Ethel Agnes Zimmermann was born to Edward and Agnes Zimmermann. Her mother was a school teacher and her father an accountant.

Ethel began singing in her church. Soon after she started doing local concert appearances. Her parents didn’t believe that show business was a respectable career for a woman. They insisted she gets an education in secretarial skills in case she didn’t become a star. She would then have something to fall back on.

After graduating in 1924 at William Cullen Bryant high school, she got a job as a stenographer for a local factory earning 28 dollars a week. She made extra money by singing at private parties in nightclubs. Her parents finally agreed to let her quit her job so she can sing full time when her gigs increased.

Warner Brothers signed Ethel Merman to a contract paying her $200 per week during the early days of sound film. After several months of doing nothing, she got a release so she could do live engagements. It was around this time she shortened her name to “Merman.”

Then in 1929, she had a nasty case of tonsillitis that caused some to worry. But it went away, and her voice came back better than ever. Then a year later in 1930 Broadway producer Vinton Freedly saw one of her acts and was impressed. He hired her for his next musical upon approval of George and Ira Gershwin, the songwriters.

Ethel Merman auditioned “I got rhythm” and “Sam and Delilah,” and the Gershwin’s were delighted with her. While the musical was in production Ethel made her debut at America's high temple of Vaudeville, the Palace. She received outstanding reviews. The audience demanded multiple encores on the opening night of “Girl Crazy” in 1930

In 1934 she filmed “we’re not dressing” with Bing Crosby and “The Daffy Kid Millions” with Eddie Cantor, but soon returned to Broadway. The play “anything goes” was rewritten during rehearsals in 1934. Ethel would write out the dialogue that the actors would improvise. Then she typed them out.

Ethel Merman appeared in the film version of “anything goes” in 1936. She was the only leading member of the Broadway cast to do it. She performed with Bing Crosby. Beginning in 1938 she permanently began to focus all her attention to Broadway.

Every major producer and composer began fighting for a chance to work with her because her name on the billboard guaranteed strong ticket sales by the end of the 1930’s. She worked on Broadway through most of WWll. She gave war bond concerts and performed for troops in the New York area.

By then she had come from making $28 a week to $4,700 a week. This was more than any performer on Broadway ever made. Ethel was also known for a foul mouth and dirty jokes.

By 1963 Ethel Merman began to take a step back from performances saying she was too tired. But she did do several films like “It’s a mad mad mad mad world” in 1963 and “The art of love” in 1965. Then in 1966, she agreed to star in a limited revival run of “Annie get your gun.”

She lost her daughter to a prescription drug overdose in 1967. She became inconsolable and went back to work with tv appearances.

In 1970 Ethel agreed to take over the lead in “Hello Dolly.” The show was to last three months but ended up lasting nine months. She played sold-out houses. This became her final run on Broadway.

Ethel Merman provided the voice in several animated shows and played herself on the Lucy show. She even sang with Kermit and the gang on the Muppet show. She created a disco album of her classic show-stoppers.

Ethel spent her days doing needlepoint and gossiping with friends. She enjoyed an active social life. She loved to write letters and maintained detailed scrapbooks of her life. Her last performance at the Carnegie Hall as a benefit was the final performance she made.

The doctors thought she suffered a stroke in April of 1983. But they soon found a brain tumor that was inoperable. Towards the end, she was unable to speak and unable to recognize herself on television. She was cared for by her son until her death on February 15, 1984, in Manhattan New York City. She was 84 years old.

In her life, Ethel Merman co-wrote two autobiographies. The first was “Who could ask for anything more?” with Pete Martin in 1955. The second was written with George Eels called “Merman.”