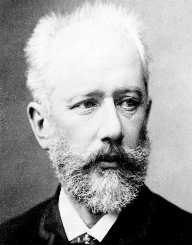 Pyotr Ilyich Tchaikovsky, sometimes anglicized as Peter Ilich Tchaikovsky, was a composer of the late-Romantic period. He was the first Russian composer whose music made a lasting impression internationally,

Pyotr Ilyich Tchaikovsky was born on 7th of May in 1840, in Vyatka, Kamsko-Votkinsk, Russia, present day Udmurtia. The family was a line of military personnel, his father Illya was a lieutenant colonel and engineer in the Department of Mines. His mother was Alexandra Andreyevna d'Assier, the second of Ilya's three wives. Both parents had arts and music training. Pyotr had sister Alexandra and twin brothers Anatoly and Modest.

When Pyotr Ilyich Tchaikovsky was four, the family hired Fanny Fanny Dürbach, a French governess, who taught him French and German. Pyotr had a passion for music and started piano lessons when he was five. At the age of 10, Pyotr Tchaikovsky spent two years boarding at the Imperial School of Jurisprudence's preparatory school and began attending the school once he reached the accepted age of twelve. His mother died of cholera in 1854. He studied law and government. The next year, his father funded private lessons with Rudolph Kündinger.

In 1859, the 19-year-old Pyotr Ilyich Tchaikovsky graduated as a titular counselor. Pyotr became a senior assistant within the year, and he remained so for three years. Pyotr enrolled at the Conservatory of the Russian Musical Society, studying music theory, harmony and composition. He graduated from the school in 1865 and became a Professor of Music Theory at the Moscow Conservatory with a salary of fifty rubles a month.

In 1865, his work: Johann Strauss II conducted characteristic Dance. He later re-titled this to  Dances of the Hay Maidens, in his opera The Voyevoda. In 1868, Tchaikovsky's First Symphony was well-received when it was publicly performed in Moscow, but had been criticized by his Masters Rubinstein and Zaremba.

From 1867 to 1878, Pyotr Ilyich Tchaikovsky composed in his spare time. His professorial duties exposed him to a wide range of music and allowed him to travel. 1869, he published his first opera, The Voyevoda. Pyotr was an all-around musician in the early 1870s, he taught, composed, wrote critical essays, and conducted as a professor.

He resigned from the Moscow Conservatory in 1878, focusing his efforts on composing after his composition made him famous. Pyotr’s work comprised of seven symphonies, eleven operas, three ballets, and a violin concerto, etc., a rough total of 169 pieces. His famous works are the ballets The Sleeping Beauty and The Nutcracker. His renowned opera was Romeo and Juliet.

In 1884, Tsar Alexander III conferred upon Pyotr Tchaikovsky the Order of St. Vladimir (fourth class), which included a title of hereditary nobility. His standing was further cemented by his Orchestral Suite No. 3 when it premiered in Saint Petersburg in January. Ivan Vsevolozhsky, Director of the Imperial Theaters, gave him an annual pension of 3,000 rubles from the Tsar and made Pyotr the premier court composer. Pyotr felt the need to promote Russian music, so he served as director of the Moscow branch of the Russian Musical Society during the 1889–1890 season, as well as conducted in 1887.

Pyotr Ilyich Tchaikovsky became involved with the immensely wealthy Nadezhda von Meck. She supported his music for thirteen years, at a base rate of six thousand rubles a year, which was helpful after he retired from the conservatory. He dedicated his Fourth Symphony to Nadezha in 1877. With her support, he finished Eugene Onegin in 1879, the only opera generally performed outside the Soviet Union. With her help, he became the first full-time professional Russian composer.

The Sixth Symphony was first heard in October 1893; he named it Pathétique at his brother’s suggestion. It was not well received as Pyotr was not a good conductor. In 1891, Pyotr Ilyich Tchaikovsky had a successful tour in the United States, where he led the New York Music Society's orchestra at the inaugural concert of Carnegie Hall. By then he was cut off by Nadezhda von Meck. He was upset by her rejection, despite no longer needed her financial support.

Pyotr Ilyich Tchaikovsky was engaged to be married to Belgian soprano Désirée Artôt in 1868, but the relationship ended as she refused to settle in Russia. In 1877, he married Antonina Miliukova and only lived together for two and a half months. Pyotr fled abroad and travelled.

The 6th Symphony was his last piece, as he died of cholera on November 6, 1893. He was interred in Tikhvin Cemetery at the Alexander Nevsky Monastery.