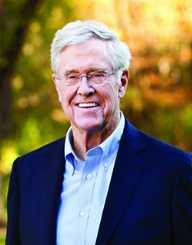 Charles Koch is an American businessman who is best known as the chief executive officer of Koch Industries.

Charles Koch was born on 1 November 1935 in Wichita, Kansas. His parents were Clementine née Robinson and Fred Koch. He also had three brothers, David, Frederick, and William. Koch attended Massachusetts Institute of Technology. He studied engineering and science and earned his Bachelors in 1957. The following year he received his Master of Science in mechanical engineering, and two years later he received another, this time in chemical engineering.

Charles Koch then returned to Kansas to work for Rock Island Oil & Refining Company, which was run by his father. He became the president of the company in 1967 and renamed it Koch Industries after his father died.

Koch Industries was a mid-sized company when Charles Koch took over. In 2015 it was named as the second largest company in America by income. Koch took over Union Oil of California in 1968. The takeover allowed Koch to expand into petroleum coke and chemical production. Koch refines a quarter of all Canadian oil sands imports to America. Koch’s brother David joined him at the company in 1970. Koch has been the chief executive officer and chairman of the company since his father’s death.

The company has expanded into some other industries such as banking, fertiliser, and fibres. Charles Koch owns an internal bank based in Luxembourg named Arteva Europe. A paper manufacturing company, Georgia-Pacific, was acquired in 2005. The Koch Ag & Energy Solutions was founded in 1988 and produces nitrogen fertilisers and agricultural turf. Koch also has holdings in oil and gas exploration and steel manufacturing.

Charles Koch married his wife Elizabeth in 1972, and together they have had two children, Chase and Elizabeth. Koch lives with his wife in Indian Wells, California. Koch has overcome prostate cancer. His net worth is estimated to be more than forty-eight billion dollars, which places him in the top twenty wealthiest people in the world.

Charles Koch has identified as a libertarian and is against what he sees as government overreach. He supports a free market with little to no government intervention and is opposed to American interference in other countries. He has spoken positively of the Tea Party movement. He donated money to campaigns that opposed Barak Obama and his administration.

Charles Koch donates money to economic studies and other causes he believes in. He focused on libertarian causes and gave a quarter of a billion dollars between 2004 and 2008. He funds some higher education courses that promote his views.