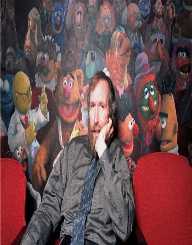 Brian Henson was born on November 3, 1963, in New York City. He was the middle child in his family. Henson had an early interest in the film industry since his father Jim Henson was a producer. Jim produced the popular children’s series Sesame Street, where Brian also appeared. His most notable appearances were in the various segments on “Number Song Series.”

When Henson got older, he began to build his own Muppets. He built the penguin puppet for the “Lullaby of Broadway” segment of The Muppet Show. In 1980, while on break from high school, Henson assisted on the bicycle sequence from The Great Muppet Caper. He was very skilled at using marionette puppets and helped in creating a device to operate so that it would seem that the dolls are riding.

Brian Henson had already begun his career during his time at school and in the 1980s, continued his work. He performed as the Jack Pumpkinhead in the 1985 movie Return to Oz. The same year he was also the main operator of special effects in Santa Claus: The Movie. The following year, Henson became the principal performed on the Audrey II puppet Little Shop of Horrors. He was controlling the mouth movement, while others performed the lips and vines. He also continued to work with his father and voiced Hoggle- one of the main characters in the 1986 film Labyrinth, as well as the Dog on 1988 and 1990 films The Storyteller.

In 1992, Henson made his directorial debut with The Muppet Christmas Carol. His next direction venture was the 1996 Muppet Treasure Island franchise film. In 1999, Henson performed the Dr. Phil van Neuter, the mad scientist puppet in Muppets From Space.


Television And Other Ventures

Brian Henson is arguably best known for his work on producing several television series. His works include the series Dinosaurs, which ran from 1991 until 1994, followed by series Aliens in the Family in 1996. He was also the executive producer of Bear in the Big Blue House (1997-2006) and Farscape (1999-2003). Besides working as an executive producer, Henson also played himself as the head judge on the 2014 reality TV show Jim Henson’s Creature Shop Challenge. He also played in the TV-movie It’s a Very Merry Muppet Christmas Movie.

Henson’s latest work included co-creating, producing and starring in the adult puppet-based show Puppet Up!. Henson has also played various characters on the British TV program That Puppet Game Show. In 2001, The Muppet Show Live special was released. Henson performed with his characters, as well as his father’s best-known character The Muppet Newsman. He again came back to this role for the 2003 video game “Muppets Party Cruise.”

Brian Henson has been married two times. His first marriage was in 1990, with the costume designer Ellis Flyte, who also worked on his father’s film the Labyrinth. The couple divorced in 2002. Henson remarried to actress Mia Sara in 2010. The couple has one child.