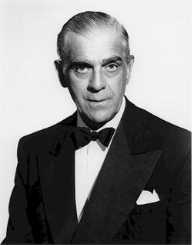 Boris Karloff was a British film actor who became prominent for his horror roles in the 1930s.

Boris Karloff was born on November 23, 1887, in London, England. His original name was William Henry Pratt. He adopted the name Boris Karloff when he started his acting career. He was the son of Edward John and Eliza Sarah Pratt. Karloff was of a mixed English and Indian ancestry from both pairs of his grandparents. Growing up in Middlesex, Karloff experienced a tough childhood. He was bow-legged as a result of rickets, had a deficiency in his speech, and lost his mother in his early years.

He started his education at Enfield Grammar School. He then transferred to Uppingham School and later Merchant Taylors’ School. He joined the King’s College for his university education. Karloff did not graduate from college. He failed his British Consular Service entry exams and thus could not pursue diplomatic career studies. Karloff is said to have deliberately failed the exams to pursue his childhood passion in the acting world.

After his exit from college, Karloff eloped to Canada with his would be first wife Grace Harding in 1909. He was labeled as the black sheep of the family for not following in the diplomatic career as the other family members. His father and seven of his elder brothers had careers in the British overseas diplomatic service.

In Canada, he worked as a manual laborer for a while. In 1911, Karloff joined a theater group and traveled around Canada. He performed in theatrical roles with the Jeanne Russell Company. He had a brief stint at an opera house with another group Harry St. Clair Company. He worked with different theater groups in Canada and adopted his stage name, Boris Karloff.

He later moved to Hollywood at the fall of 1918. In 1919 he got his first role in a film. He went on to do several silent films like The Masked Rider which was produced in 1919. Karloff impressed the directors with his villain acting. He started getting bad boy roles in Hollywood. In 1920 he did The Hope Diamond Mystery, and another film Deadlier Sex. In the 1920s he did other films like Omar the Tentmaker in 1922, Dynamite Dan produced in 1924 and the jungle epic film Tarzan and the Golden Lion in 1927.

At the beginning of the 1930s, Karloff did appear in another epic film King of the Wild produced in 1930. In 1931 he got had his greatest breakthrough in the film industry. He started with roles in two films. Karloff did appear in the crime based film The Criminal Code. He also played the role of a villain reporter in the film Five Star Final. After casting in over 80 films, Karloff got his major career role through film producer James Whale. Whale gave him a role in the film Frankenstein. Karloff played the role of a heinous monster in the film that was widely received by the film critics.

In 1932 he played the role of the ancient Egyptian royal physician Imhotep in the film The Mummy. Later that year he got another acting role in The Old Dark House. Karloff became synonymous with horror film characters in Hollywood. In 1934 he did cast in The Black Cat and another film Gift of Gab. He followed the performance with the 1935 role in the film The Raven. The following year Karloff appeared in the film The Invisible Ray.

In 1935 Karloff got another chance to play the role of the monster in Bride of Frankenstein. He also appeared in the 1939 version Son of Frankenstein, and the 1944 version House of Frankenstein. In his acting career, the Frankenstein monster was the biggest role he played in his life. He continued playing other horror films until his exit from the scene in 1967.

Karloff was inducted into the Hollywood Hall of Fame by two stars. He got a star at 1737 Vine Street for his exploits in the film industry. Karloff got his second star for 6664 Hollywood Boulevard for his input in the television acting.

In 1997, he was posthumously recognized by the US Postal Service by two postal stamps depicting the Frankenstein monster and Imhotep.

Karloff got married six times in his lifetime. He fathered a son in his fifth marriage. Apart from the last marriage which ended upon his death, all the other five ended in divorce.

Karloff died on February 2, 1969, of pneumonia complications. He was cremated at the Guildford Crematorium.