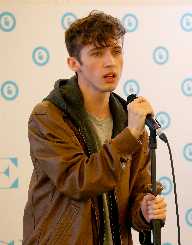 Troye Sivan Mellet was born on June 5, 1995, in Johannesburg, South Africa. When he was just two years old, his family moved to Australia due to the rising crime in South Africa. He also has three siblings, Steele, Tyde and Sage and currently resides in Perth, Western Australia. His mother is a homemaker, and his father is a real estate agent.

Sivan attended the Carmel School until 2009 when he began distance education. In 2013, Sivan came out on YouTube as gay. He came out to his family years before releasing the video.

Sivan began his musical career in 2006 when he sang at the Channel Seven Perth Telethon. He performed a duet with Australian Idol winner Guy Sebastian. Sivan took part in the Telethon also in 2007 and 2008. In 2007, Sivan released his debut album Dare to Dream. In 2010, Sivan opened the YouTube edition of the collaborative music charity video. We Are the World 25 for Haiti. The video helped to raise funds for the victims of 2010 Haiti earthquake.

In 2013, Sivan signed a contract with EMI Australia, a Universal Music Australia label. He released a five-song EP TRXYE in August 2015. The album debuted at No. 1 position on iTunes charts in over 55 countries. The album reached No. 5 on the Billboard Top 200 in its first week. Single from the album “Happy Little Pill” peaked at number 10 on the ARIA Singles Chart and was later certified Gold by the Australian Recording Industry Association.

Several of Sivan’s music videos have featured LGBTQ relationships between characters in the video. The video for his single “Wild” featured him and his male love interest. The music video for his song “Heaven ft. Betty Who” features historical LGBTQ movement footage and different couples, as well as several shots with him and another man.

In 2012, Sivan began posting video blogs on YouTube. At the time, he had 27,000 subscribers, but by 2016, Sivan already had over 4 million subscribers on his YouTube channel. His videos have a total of 243 million views. His video with Tyler Oakley titled “The ‘Boyfriend’ Tag” earned them both the Teen Choice Award.

In 2007, Sivan starred in the production Oliver! As Oliver Twist at Regal Theatre. The following year he starred in the West Australian short film Betrand The Terrible. The same year he was also cast as young James Howlett in X-Men Origins: Wolverine.

His telethon performance caught the eye of a Hollywood agent who asked him to send an audition tape. In 2009, Sivan auditioned for the lead role in Spud, a film adaptation of a 2005 novel of the same name. The film was released in 2010 in South Africa and was later nominated for six SAFTAs. He also starred in the sequels of the film, Spud 2 and Spud 3.

Sivan has named Amy Winehouse, Taylor Swift, Lorde and Frank Ocean as his favorite artists and influences. His music style is layered electropop and is often described as youthful, dreamy and mature.