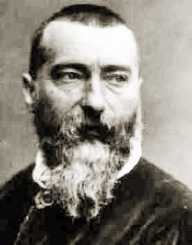 Jean Baptiste Perrin was educated at the École Normal Supérieure and Sorbonne University.

Jean Baptiste Perrin became an assistant in physics 1894-1897. He began his research into cathode rays and x-rays. And in 1879, he received his doctorate for his thesis on Roentgen rays and cathode. After receiving his Ph.D. Perrin joined the staff of Sorbonne University in Paris as a lecturer, becoming a professor in 1910. He held this post until 1940 he fled to the United States after the Nazi invasion of France.

In 1926 Jean Baptiste Perrin received the Nobel Prize in Physics for his work on the atom. Perrin showed in 1895 that cathode rays are made up of particles of negative electrical charge.

Perrin carried out experiments testing Einstein’s explanation of Brownian motion based on the random motion of molecules. In 1908 he showed an agreement between experiment and theory which confirmed the actual existence of atoms, proposed a hundred years earlier by John Dalton. Perrin was the first scientist to use the term Avogadro’s number.

Jean Baptiste Perrin was awarded the Nobel Prize in Physics in 1926. Other awards he received include the Royal Society’s Joule Prize (1896), the Vallauri Prize (1912) and the La Caze Prize (1914) from the Paris Academy of Sciences. He was also the recipient of honorary doctorates including ones from the University of Brussels, University of Liege, University of Ghent, University of Calcutta, Princeton University and Oxford University.

Jean Baptiste Perrin’s first wife was Henriette Duportal. They had two children Aline and Francis. Henriette died in 1938. His next partner was Nine Choucroun, a fellow scientist who escaped with him to the United States in 1942. During World War I (1914-1918) Perrin was an officer.

Perrin died on the 17 April 1942 in New York City. After World War II, in 1948, his body was shipped back to France on the Jeanne d’Arc. He was buried in the Pantheon.

Jean Baptiste Perrin was a prolific writer and published a large number of scientific papers as well as books. His first book was Les Atomes (1913).