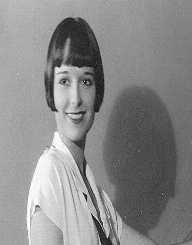 Mary Louise Brooks was born in Cherryvale, Kansas, the U.S. on November 14, 1906. She was professionally known as Louise Brooks who began her career as an actress and dancer. Brooks took the lead in three feature films which were made in Europe; the Pandora’s Box filmed in 1929, the Diary of a Lost Girl in 1929 and Miss Europe in 1930.

Louise Brooks is also known to have starred in many other films before she retired in 1938. She later embarked on publishing her memoir known as the Lulu in Hollywood in 1982 and died at the age of 78 of a heart attack on August 8, 1985, in Rochester, New York, U.S.

Mary Louise Brooks was born in Cherryvale, Kansas, the U.S. to lawyer Leonard Porter Brooks and Myra Rude. She was also known by her nicknames, Lulu, Brooksie or Scrubbie. Her parents were either too busy or ignorantly based that her early life succumbed to reckless growing up. Her mother, however, is a talented pianist nurtured in Brooks and her siblings the love for music and art.

When she was nine, Brooks was sexually abused by her neighbor and to the knowledge of her mother; Myra insinuated that it might have been her fault in leading him on. This made Louise develop intense distrust in men who seemed kind and gentle and rather desired men who were dominating.

Louise Brooks is a talented pianist began her career as a dancer and signed with the dance company in Los Angeles known as the Danishawn in 1922. It is in this company that Louise advanced into a starring role which granted her opportunities into the filmmaking industry. She began her career in Hollywood with a renowned and fascinating personality always being the protagonist many would not identify with.

To her, however, it was her ideal character along with her exemplary beauty that made her a standalone figure in the filmmaking. The restrictive role in the American society made Louise Brooks go her way because women were confined to the ideals of others and not their expressions.

Thousands of women were attracted to her beauty and pretty much to her popular hairstyle, the bobbed cut, which they adopted and became the sense of pride for every woman in the American society. The norms of the film industry in America did not work so well for Brooks which in turn made her go her way to Europe. It is here that she appeared in many German productions and proved that she was equally a talented female actress.

Many of her memorable films were made in Europe. However, her dissatisfaction with the Hollywood film productions made her quit her career as an actress in 1938 and spent her later years in writing and painting. Publishing a good number of books with her latest being her autobiography the Lulu in Hollywood published in 1982 in which Louise Brooks described her journey through her life.

Louise Brooks played the character of a sexually liberated woman taking the name Lulu as the stage name in 1929 in the film directed by a German, Pabst’s film. This production was not earlier accepted due to its portrayal of lesbianism. But over the times it is regarded as the finest in the classic production and her finest film. She also wrote the role of a naive girl known as Thymian in the Georg Pabst’s directed silent film ‘Diary of a Lost Girl’ in 1929.

Louise Brooks first married Edward Sutherland in July 1926 and later on got divorced in June 1928 due to her affair with Preston Marshall. She then left Deering Davis her second husband after five months of marriage which made her have a conscience of a sexually liberated woman who had lovers, both men, and women. She embraced lesbianism and bisexual women trying to make an iconic image in lesbianism.

Louise Brooks is celebrated for her acting roles and as a legendary actress in the silent films Diary of a Lost Girl and the Pandora’s Box. She also brought to view the flapper age with her bobbed haircut. Though many of her films are considered lost she still has her status as one of the most beautiful and talented actresses.

Louise Brooks lived her life in obscurity suffering from Arthritis for many years and later died on August 8, 1985, of a heart attack in Rochester, New York and was buried in Holy Sepulcher Cemetery.