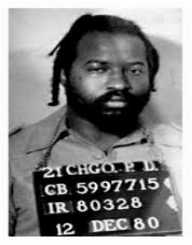 Notorious criminal Jeff Fort was born on February 20, 1947, in Aberdeen, Mississippi, United States of America. His parents were Annie and John Lee Fort. Jeff was one among the ten children of his parents.

Jeff Fort had nine siblings including six brothers and three sisters. In 1955, his parents moved to Woodlawn, a low-income community in the south side of Chicago, Illinois. They were in search of a better livelihood. Jeff studied at the Hyde Park High School. However, he dropped out of school after the ninth grade. He soon became a juvenile delinquent and was in and out of detention several times.

In one such detention center called Illinois State Training School for Boys, Jeff Fort met Eugene Hairston. Soon they developed intimate friendship between them. Inspired by the heroics of juvenile gangster Vice Lord, they founded a gang and named it the ‘Blackstone Rangers.’ Their main intention of forming the group was to protect themselves from the hostile environment of their locality.

However, soon they were into organized crime. Their gang grew in strength over time and took over the area east of Woodlawn Avenue as their territory. The local youth feared getting assaulted by the Blackstone Rangers. Hence, they reluctantly came forward to join the gang. The gang, in return, assured them of their safety.

Life As A Gangster

As the gang leader of the Blackstone Rangers, Jeff Fort ruled over the rival gangs of the south Chicago area by his shrewd moves. He was quite capable of forming alliances with the rival groups.

Jeff Fort was also a master in solving disputes expeditiously. His gang strength rose to about 5000 members with 21 gangs joining hands together under his leadership. By mid-60s, his gang began their activism in both political and community arenas.

He even brought the Blackstone Rangers consisting of 21 different gangs under the umbrella of a governing body called the ‘Main 21’. A gang leader called the ‘General’ was the commander-in-chief of the gang.

Jeff Fort and his partner in crime Hairston floated a political organization in 1967. They named it the ‘Grassroots Independent Voters of Illinois.’ They applied to the Office of Economic Opportunity for a financial grant. The grant was to be used for a skill development program of the gang members.

Under the advice and guidance of Presbyterian minister Reverend John Fry, Jeff and his political organization successfully secured a US$1 million federal grant. The Blackstone Rangers also collected loans and grants from private institutions.

The Chicago citizens were not opposed to Jeff’s gang. They accepted Blackstone Rangers as an integral part of the city. President Richard Nixon had even once invited him to attend the 1969 inaugural ball after the 1968 Presidential elections.

The court sentenced Jeff’s partner Eugene Hairston to imprisonment in 1966. After Hairston’s departure, Jeff took complete control of his gang. He began consolidating the strength of his gang by allowing members of other similar bands to join the Blackstone Rangers.

In 1968, he renamed his gang as the Almighty Black P. Stone Nation or Black P. Stones. Soon, the revamped gang began doing all types of criminal activities including extortion, robberies and also forced recruitment. They even tried to maintain the law and order situation of their area of operation parallel with the police authorities.

Soon, the Black P. Stones gained total control of the south side of Chicago. They also started demanding protection money from the sex industry and the illegal dealers of narcotic substances.

In 1972, the court sentenced Jeff Fort to five years in prison for misappropriation of federal funds. He spent the years of his imprisonment in Leavenworth Penitentiary.

While he was in detention, he converted his religious belief and transformed himself into a devout Muslim. Imam Chief Prince Malik was his new Islamic name. Jeff came out of prison in 1976 after the jail authorities granted parole to him.

Jeff Fort formed a new organization immediately after his release. He named the organization ‘El Rukn,’ which in Arabic means black stone. The group purchased a building previously used to display movies.

They named it ‘The Fort’ and began their nefarious activities of drug trafficking/peddling using the building as their center. The group portrayed the building as a mosque. However, in reality, the building served as a center for constant peddling of drugs such as cocaine and heroin. In November 1983, following some invaluable tip of, the police authorities successfully trapped Jeff. He was indicted for drug trafficking charges after that.

Jeff Fort was declared guilty of his charges and was sentenced to 13 years of imprisonment. However, Jeff continued to lead his gang through coded telephone calls from his prison.

In 1987, in a sting operation police unearthed a plot to bare an act of domestic terrorism on behalf of Libya, a foreign country. The cops caught Jeff Fort while he was finalizing the deal. He was subsequently sentenced to imprisonment for 80 years.

At present, Jeff is serving his concurrent prison sentence of 80 years and 75 years. For the last more than ten years, he was in solitary confinement inside ADX Florence supermax prison in Florence, Colorado.