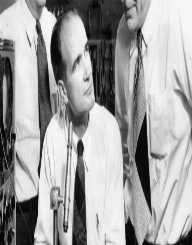 William Shockley was a physicist and inventor.

William Bradford Shockley Jr. was born on 13 February 1910 in London, England. His father William Sr. was a mining engineer, and mother Mary was a deputy mineral surveyor, both were Americans. William Shockley was raised in Palo Alto, California since he was three years old after his parents went broke in England. William Jr. was homeschooled until he was eight after the family had settled down. William studied at Palo Alto Military Academy and then graduated from Hollywood High School when he was seventeen. In 1928, William Shockley spent a year inatUniversity of California in 1928, before earning his Bachelor of Science degree from California Institute of Technology (Caltech) in 1932.

William Shockley then gained his doctorate from Massachusetts Institute of Technology (MIT) in 1936, with his dissertation Calculations of Wave Functions for Electrons in Sodium Chloride Crystals under the guidance of Professor J.C. Slater.

In 1933, William Shockley taught at MIT while working on his doctoral dissertation. After his graduation, William was recruited by physicist Phil Morse tow work at Bell Telephone Laboratories, joining a research group lead by Clinton Davisson. When World War II broke out in 1942, William Shockley joined the Navy as a military researcher, focusing on radar research.

He took leave from the laboratory to work as a research director for the Anti-Submarine Warfare Operations Group at Columbia University. The research was to find ways to aid detection of submarines using convoying techniques and how to target enemies through air and sea. He was then made Expert Consultant in the office of the Secretary for War.

William Shockley returned to Bell Laboratories after the war, where he assembled a team of chemist, physicist, electronics experts, and technicians to form a solid-state physics group. William Shockley aim was to find an alternative to the glass vacuum tube amplifiers. The vacuum amplifiers were fragile and expensive, as well as impractical. The team did a lot of studies about semiconductors before building the first point-contact transistor in 1947 with John Bardeen and Walter Brattain. A year after their discovery, William Shockley improved on the design, using semiconductors to control and amplify electronic signals. The team developed the point-contact transistor in 1947. William Shockley was upset that his name was left off the patent register, and secretly invented the junction transistor, by a sandwich method. He published his treatise: Electrons and Holes in Semiconductors, in 1950, featuring many ideas and equations that explained the transistor, and how electrons flowed in solid state crystals. His work became a reference text for development of improved variants of the transistor and other semiconductors.

Leaving Bell Labs around 1954- 55, William Shockley worked as a director of research for the Weapons Systems Evaluation Group in the Department of Defense, and few lectures in Caltech before starting Shockley Semiconductor Laboratory in Mountain View, California during 1956. He wanted to live close to his mother in Palo Alto. It was the first company to work on silicon semiconductor, and how Silicon Valley got its name. After his eight of his researchers left Shockley Semiconductor Laboratory in 1957, the company was bought by the Clevite Transistor Corporation in April 1960. William Shockley left after Clevite sold his company to International Telephone and Telegraph in 1965 where he returned to Bell Telephone Laboratories as an executive consultant. In 1963, William Shockley was the first Alexander M. Poniatoff Professor of Engineering and Applied Science at Stanford University. He retired as from Bell Laboratory and Stanford University in 1975.

In 1965, William Shockley spoke about Genetics and the Future of Man, as he became interested in genetics and human intelligence. He came to the conclusion that intelligence was based on racial heritage, and suggested that people with IQ below 100 should undergo voluntary sterilization. His theory was funded by Pioneer Fund between 1969 and 1976, where it contributed to his eugenics research.

William Shockley training program for B-29 bomber pilots using new radar bombsights warned him the Medal of Merit in 1946 from Secretary of War Robert Porter Patterson. He was elected to be a member of National Academy of Science (NAS) in 1951. William won the Comstock Prize in Physics in 1953, awarded by NAS. William Shockley shared the 1956 Nobel Prize in Physics for his invention, together with William Shockley with ex-colleagues John Bardeen and Walter Brattain.

William Shockley married first wife Jean Alberta Bailey in August 1933, and have three children together: Alison, William, and Richard. The couple divorced in 1955. He later married Emmy Lanning, who was widowed upon his death on August 11, 1989. William Shockley died of prostate cancer,  was buried in Alta Mesa Memorial Park in Palo Alto, California.